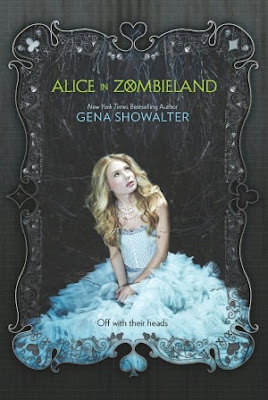 She won’t rest until she’s sent every walking corpse back to its grave.
Forever.
Had anyone told Alice Bell that her entire life would change course between one heartbeat and the next, she would have laughed. From blissful to tragic, innocent to ruined? Please. But that’s all it took. One heartbeat. A blink, a breath, a second, and everything she knew and loved was gone.
Her father was right. The monsters are real.
To avenge her family, Ali must learn to fight the undead. To survive, she must learn to trust the baddest of the bad boys, Cole Holland. But Cole has secrets of his own, and if Ali isn’t careful, those secrets might just prove to be more dangerous than the zombies.

Let me start my review with this: if you’re looking for some kind of Alice in Wonderland retelling with zombies in it, then Alice in Zombieland is not the book for you. Don’t be fooled by the cover or the title. There are very very few references to the original fairytale, which is disappointing since I was looking forward to reading Wonderland with zombies. However, Alice in Zombieland manages to hold on on its own.

What caught my attention was the title and the cover. When I first saw Alice in Zombieland, I was like woah there. The title sounds intriguing and the girl on the cover looks exactly how Alice from Alice in Wonderland would look like if she was a regular teenage girl and not a television pixel. That light blue dress she’s wearing is also so adorably princessy, which fits the Alice from the movie.

To start off, the zombies in Gena Showalter’s Alice in Zombieland isn’t like all the other zombies you’ve read about in other books at all. No, these zombies only appear in spirit form and feed on people’s spirit when they die. Yes, they still rot and stink, and yes, they will come after you.

Despite my disappointment with Alice in Zombieland having nothing to do with the original Alice in Wonderland (other than Ali’s name, the chapter titles, and the rabbit cloud), the book managed to pull me in. Why? Well, the characters are awesome. Alice has a witty sense of humor that managed to gain a little chuckle out of me now and then and I just love her best friend Kat. Seriously, that girl is gold. She’s always there for Ali (although Ali is barely there for her), stands up for her, and truly has Ali’s back. I want a Kat with me at all times in real life.

I love how Gena Showalter also spiced up Alice’s powers. Killing zombies, the ability to get into spirit form, seeing visions of the future…and I should stop mentioning any more or I’ll ruin the entire book for you.

I also adored Cole, although I still don’t trust him completely. He’s big, bad, and furiously protective. Who wouldn’t adore a guy with thick jet-black hair that’s almost blue and violet eyes? The only problem I had with him though is that I just don’t trust him after his past relationship with Mackenzie. He didn’t give Ali a good reason on why they broke up – just said something along the lines of eh, we got bored of each other. There’s something more to that story, I can tell.

There are also a couple of flaws in Alice in Zombieland. One main flaw that constantly stood out was where is Reeve? Reeve is supposingly part of Kat’s group along with Wren and Poppy, but after that party episode, she never appears ever again. It’s like Gena Showalter just completely forgot about her.

I will definitely read Through the Zombie Glass as soon as I get my hands on it. Why? Well, I’m praying that Kat would be well and okay and I want to know more about Cole. (I think at this point, Ali might as well be a minor character to me.)