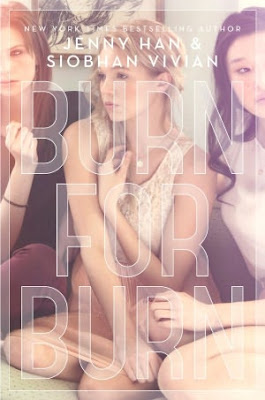 BIG GIRLS DON’T CRY…
THEY GET EVEN.
Postcard-perfect Jar Island is the kind of place where nobody locks their doors at night, where parents can sleep easy, knowing their daughters are tucked away safe and sound in their beds.
But bad things can happen, even to good girls, and sometimes the only way to make things right is to do something wrong.
Lillia used to trust boys, but not anymore. Not after what happened this summer. And she will be damned if she lets the same thing happen to her little sister.
Kat is through with being called a freak. She’s over the rumors, the insults, the cruel jokes made at her expense. It all goes back to one person – her ex-best friend – and Kat’s ready to make her pay.
Four years ago, Mary left Jar Island because of a boy. But she’s not the same girl anymore. Now that she’s back, he’s gonna be in trouble…’cause she’s coming after him.
Three very different girls who want the same thing: sweet, sweet revenge. And they won’t stop until they’ve each had a taste.

First Sentence: The morning fog has painted everything white.

When I first heard that Jenny Han and Siobhan Vivian was writing a book together, my first thought was somewhere along the lines of oh no! and I’m not checking that out! I didn’t like Jenny Han’s Summer trilogy at all (the first book was too boring for me) and I found Siobhan Vivian’s The List an okay read, but not at all memorable. But surprise, surprise, I did indeed check Burn for Burn out, and the thing is, I loved it!

What immediately grabbed my attention about Burn for Burn was its breathtaking cover. I have never met a book that manages to have it’s entire cover covered with huge block-like letters – and look good doing it. Burn for Burn is that book.

Luckily for me, the outside of the book matched its inside. Burn for Burn is told from three different points of views: Lillia, Kat, and Mary. It was a bit confusing at first because I was trying to figure out which girl was which on the cover – and how they were hurt/betrayed that caused them to want revenge. It took a while for the betrayals to appear since the book was told from present time – flashback – and back to present time in some chapters.

I’ve never met any book that got me angry, really angry. So angry that I just wanted to find that bully that harassed me in the eighth grade, shake him, and then punch him out. That’s what Burn for Burn did. It relived my old experiences getting bullied – and actually made me want to do something about it instead of just sitting there enduring the bullying. I could feel my face getting redder and redder as I read on. I felt the pain and anger Lillia, Kat, and Mary had felt and dealt with like it was my own.

One character that majorly annoyed me to no end was Rennie. Who does she think she is? She pretends to be so nice and supportive, but in the end, it’s her opinion that matters and her own agenda. Throughout the book, I was wondering why Lillia even put up with her, especially since Rennie played a huge part of what happened to Lillia. She just watched it happen, knowing what a big deal it was for her “best friend” and just ignored her. That’s just sick. And for Rennie to supposingly “love” Reeve after what she did with another guy just screams [a word that I’ll prefer not to mention]. Rennie deserves a lot worse than what the girls did to her.

The cliffhanger at the end was amazing. I definitely think that Reeve got exactly what he deserved. In fact, I hope he lives so he can suffer through it. It also brings up a lot of questions. What will happen next? Will they get caught? Will the truth come out?

Despite what people say, I can find no paranormal element in Burn for Burn unless you count those weird incidents around Mary, but as for me being my realistic self, I highly doubt it. Like Kat said, it all must be a coincidence. But if there is a hint of paranormal events revolving around Mary, then she might be the next Carrie*…

I can feel a major conflict brewing in the next book focused around one character: Alex. Kat wants him back, but he had always liked Lillia all along. I wonder how that will turn out.

Last, but not least, I’ll definitely be rechecking Jenny Han’s Summer trilogy. Maybe I should give it another chance and have been missing out on something awesome. Just maybe.