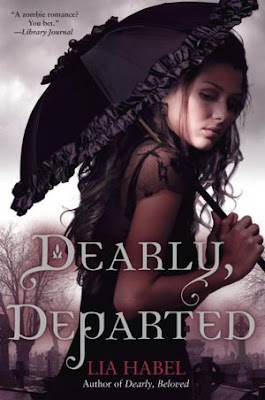 Love can never die.
Love conquers all, so they say. But can Cupid’s arrow pierce the hearts of the living and the dead – or rather, the undead? Can a proper young Victorian lady find true love in the arms of a dashing zombie?
The year is 2195. The place is New Victoria – a high-tech nation modeled on the manners, mores, and fashions of an antique era. A teenager in high society, Nora Dearly is far more interested in military history and her country’s political unrest than in tea parties and debutante balls. But after her beloved parents die, Nora is left at the mercy of her domineering aunt, a social-climbing spendthrift who has squandered the family fortune and now plans to marry her niece off for money. For Nora, no fate could be more horrible – until she’s nearly kidnapped by an army of walking corpses.
But fate is just getting started with Nora. Catapulted from her world of drawing-room civility, she’s suddenly gunning down ravenous zombies alongside mysterious black-clad commandos and confronting “The Laz,” a fatal virus that raises the dead – and hell along with them. Hardly ideal circumstances. Then Nora meets Bram Griswold, a young soldier who is brave, handsome, noble…and dead. But as is the case with the rest of his special undead unit, luck and modern science have enabled Bram to hold on to his mind, his manners, and his body parts. And when his bond of trust with Nora turns to tenderness, there’s no turning back. Eventually, they know, the disease will win, separating the star-crossed lovers forever. But until then, beating or not, their hearts will have what they desire.

First Sentence: I was buried alive.

When I first laid my eyes upon Dearly, Departed, it was love at first sight. A gothic Victorian cover with different shades of pink, a girl with a parasol on the front cover, and a thick book unlike all those ultra thin books that come out these days that gets passed for “trilogies”, I immediately bought Dearly, Departed without even looking at the book’s rating or reviews. I didn’t care if that was a mistake and I wasted my money on a bunch of loathsome leaves. And luckily, it wasn’t a mistake at all.

My first comment is Lia Habel can sure write. Dearly, Departed is a very thick 467 page book, yes, but her writing just lures you into her world and refuses to let go. Hell, I never realized that I had read one-third of the book in a single sitting until I had to go to the bathroom and just glanced at how much I’ve read.

I also love Lia Habel’s world-building in Dearly, Departed. Every single thing is explained. Why the zombies exist, why everything in Nora’s society is Victorian styled, the new technology, etc. No part of the world-building is missing. And the thing is, Lia Habel also didn’t write a cliche zombie book. No, her version of a zombie includes some zombies actually being civilized, a concept never explored in other young adult books I’ve read.

However, there is a major flaw in her world-building though. Since the society reverted back into Victorian times where they felt everything was perfect, won’t the women rebel having their freedom taken away? I know I would. After decades of women fighting for their rights and having it taken away all in one go would frustrate and anger me. To have no voice again, not being to vote or own my own property will probably drive me insane after I had my own taste of freedom. It’s like feeding a child plain oatmeal every day, randomly giving him chocolate the next day, then feeding him oatmeal again. Once he’s actually tasted chocolate, why would he agree to eat oatmeal ever again? Despite the Victorian time being put into act, I never saw any signs of women being oppressed in Dearly, Departed, which is confusing itself.

The greatest thing about Dearly, Departed, in my opinion, is Lia Habel keeps shoving things in my face that I never saw coming. He betrayed them? That was his agenda all along? I couldn’t help gaping and be pleasantly surprised at all the twists and turns Lia Habel threw at me. I’ll like to say I knew that was going to happen, but I can’t.

Many people claim that the multiple five point of views in Dearly, Departed was too much for them to keep track of, but for me, I got everything. In fact, I may even argue that each of them has a certain purpose. But then again, that’s just me since I love to read books with multiple points of views.

I’ll be reading Dearly, Beloved, the next book in the Gone with the Respiration series, very soon since I already brought it because of the brilliant gothic cover. I’m concluding that Nora and Bram’s love will never last for obvious reasons, but I want to read about it while it does.