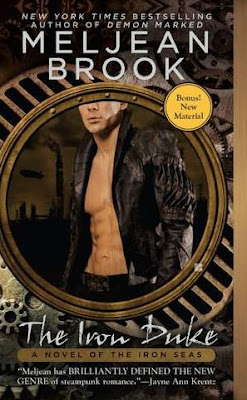 After the Iron Duke freed England from Horde control, he instantly became a national hero. Now Rhys Trahaearn has built a merchant empire on the power – and fear – of his name. And when a dead body is dropped from an airship onto his doorstep, bringing Detective Inspector Mina Wentworth into his dangerous world, he intends to make her his next possession.
Mina can’t afford his interest, however. Horde blood runs through her veins, and despite the nanotech enhancing her body, she barely scratches out a living in London society. Becoming Rhy’s lover would destroy both her career and her family, yet the investigation prevents her from avoiding him…and the Iron Duke’s ruthless pursuit makes him difficult to resist.
But when Mina uncovers the victim’s identity, she stumbles upon a conspiracy that threatens the lives of everyone in England. To save them, Mina and Rhys must race across zombie-infested wastelands and treacherous oceans – and Mina discovers the danger is not only to her countrymen as she finds herself tempted to give up everything to the Iron Duke.

First Sentence: Mina hadn’t predicted that sugar would wreck the Marchioness of Hartington’s ball; she’d thought the dancing would.

Me and steampunk books just don’t mix. I don’t like it and it sure as well doesn’t like me back. I’ve never, ever, finished a single steampunk book without skimming it. When I heard of The Iron Duke through one of my friends and that it was steampunk novel, my first thought was oh no, should I even bother to try it? To my surprise, I really enjoyed reading The Iron Duke including all the steampunk aspects of it, and its brilliant fantasy world.

I loved all the characters in The Iron Duke. Mina was strong, smart, and knows exactly what she wants. There’s no possible way you won’t like her. I understood her fear, her horror, and her insecurities relating with the Horde and her conflicting feelings for Rhys.

At first, I thought Rhys was going to be one of those dictator kind of characters, the ones who takes anything they like by brutal force and won’t care about crushing the people who stood in their way (because the summary hints of that), but no, he is different. He’s a captain who truly cares about his people and is willing to give up a lot for them. The only thing I don’t approve of is his view on needs and possessions. Hopefully that will change, now that he has Mina by his side to slowly change his mind.

The world-building in The Iron Duke was fantastic. Everything was explained – who the bounders and buggers are, why the buggers fear the Horde, what nanoagents do, and even why the zombies exist. (Believe me, most of the zombie books I’ve read so far didn’t bother explaining that one. They are just like zombies exist and you have to accept it.) The most important thing is all the explanations fit neatly into the storyline. Unlike other books I’ve read, The Iron Duke gives little glimpses into the world of the Horde when appropriate, not giving long detailed paragraphs full of information. I’ve never read a book that went into such detail about their world without boring me to death. I can easily say that Meljean Brook knows how to write and engage the reader into her novel.

Many people who’ve read The Iron Duke say that the romance plays a huge part in the book, but I don’t agree. In my opinion, romance takes place in half of the book, but is not the main focus of The Iron Duke. Despite that, the romance scenes were nicely executed, a lot better than most of the historical romances I’ve ever read.

I will definitely be reading Heart of Steel, the next book in the Iron Seas series. I heard it’s Yasmeen’s story by reading the summary goodreads has. I want to learn more about Yasmeen and her past – how did she become the Yasmeen here today that’s insecure and doesn’t trust anyone? Hopefully Heart of Steel will provide the answers.