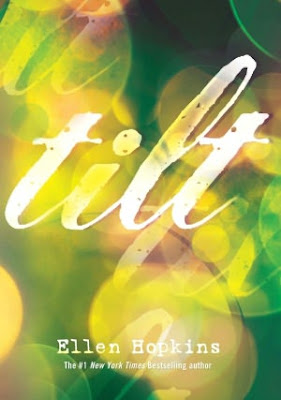 Witnessing the fallout from the poor choices their parents make and the lies adults tell themselves, three teens are clinging to the last remnants of the secure and familiar world in which they’ve grown up. But the ground is shifting. What was once clear is now confused. Everything is tilting.
Mikayla is sure she’s found the love her parents seem to have lost, but is suddenly weighing nearly impossible choices in the wake of dashed expectations. Shane has come out, unwilling to lie anymore about who he is, but finds himself struggling to keep it all under control in the face of first love and a horrific loss. Harley, a good girl just seeking new experiences, never expects to hurtle toward self-destructive extremes in order to define who she is and who she wants to be.
Inspired by teen characters first introduced in her adult novel, Triangles, Ellen Hopkins crafts a wrenching story that explores the ways we each find the strength we need to hold on when our world’s been tilted completely off its axis.

First Sentence: Completely off its axis the night I hooked up with Dylan Douglas.

As usual, Ellen Hopkins manages to engage, entertain, and [sort of] terrify readers with the harsh realities of life and the consequences of the decisions we teenagers make. Tilt is a book that managed to make me hate a particular character so strongly, but, at the same time, understand their position. It made me feel conflicted about life, but at the same time, know, or hope, that I wouldn’t ever make these decisions that the teenagers in Tilt did. (Ellen Hopkins is well known for doing that to me.)

Tilt focuses on teenage pregnancy, HIV, drugs, sex, and suicide. Mikayla and her boyfriend Dylan has been dating for awhile, and with one simple little mistake, she ends up pregnant. Shane is gay, has finally found love, but his partner Alex has HIV. To make matters worse, his little sister, Shelby, would be facing death soon. Harley is fourteen years old and just wants to stand out.

Let me start with who frustrated and angered me so much, but I could understand their position at the same time: Dylan. A huge part of me is angry that he can just get rid of Mikayla like that just because she wants to keep the baby and another part of me knows that it would happen eventually anyway since he half-cheated on her when she was grounded and unable to see him. At the same time (I hate myself for feeling this way), I understand his position. If I was Dylan and got my girlfriend pregnant, I would also insist on not taking any responsibility and leave her when she refused to get an abortion. However, I would not dump her and go out with my ex-girlfriend the next day. Boys.

Thank god Mikayla has Tyler. The only problem is, would she still be blind about Dylan’s so-called “love” and end up pushing Tyler away? Only the sequel, if there would ever be one, can tell.

The character that’s way beyond redemption in my opinion? Harley. To sum up her drama all in a single sentence, it’s basically this: fourteen-year-old Harley desperately craves for attention. All the ways she acts out is for someone to notice her. Her makeover, her trying weed, her hanging out with Lucas; she just wants someone to pay attention to her. I frankly think she fully deserved what she got. You can’t expect to do something and expect there to be no consequences for your actions. If the world was that way, people would be robbing banks and killing off people left and right. I may sound heartless, but Harley should know a lot better.

I’ll definitely read Triangle, Ellen Hopkin’s other book, that tells the story of the teen’s parents. Many things weren’t clear about their parents in Tilt, and I want to find out what exactly happened and what they are thinking.