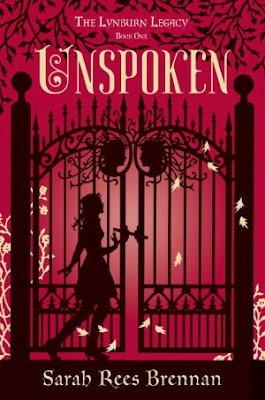 Kami Glass is in love with someone she’s never met…a boy she’s talked to in her head since she was born. She wasn’t silent about her imaginary friend during her childhood, and is thus a bit of an outsider in her sleepy English town of Sorry-in-the-Vale. Still, Kami hasn’t suffered too much from not fitting in. She has a best friend, runs the school newspaper, and is only occasionally caught talking to herself. Her life seems is in order, just the way she likes it, despite the voice in her head.
But all that changes when the Lynburns return.
The Lynburn family has owned the spectacular and sinister manor that overlooks Sorry-in-the-Vale for centuries. The mysterious twin sisters who abandoned their ancestral home a generation ago are back, along with their teenage sons, Jared and Ash, one of whom is eerily familiar to Kami. Kami is not one to shy away from the unknown – in fact, she’s determined to find answers for all the questions Sorry-in-the-Vale is suddenly posing. Who is responsible for the bloody deeds in the depths of the woods? What is her own mother hiding? And now that her imaginary friend has become a real boy, does she still love him? Does she hate him? Can she trust him?
Sarah Rees Brennan brings Gothic romance kicking and screaming into the twenty-first century with a heroine who can take care of herself, a boy who needs to be saved, and the magical forces that bring them together and tear them apart.

First Sentence: Every town in England has a story.

Looking at all the reviews written about Unspoken online, it seems like I’m part of the minority opinion, again. First Shadow and Bone (because of how easily I can predict every plot twist and they all actually happened), and now Unspoken. While other people go on and on about how amazing Unspoken was, I’m here, alone, thinking, am I missing something? It also leads me to think – is something wrong with me?

My first issue with Unspoken was that Sarah Rees Brennan’s writing made it very hard to connect with the characters. Unspoken is written from the third person point of view when I felt that it could do a lot better if it was written from the first person point of view, probably Kami’s. I couldn’t connect with Kami at all – I was just following along with her story. The thing about Kami though was that she really annoyed me when she constantly brought up about how unattractive she was compared to her two gorgeous friends. It’s like hello, be glad of your mixed Asian heritage! I wish I was of mixed heritage! Be glad you are and just accept it with a smile! People also describe Kami as “witty” and love her because of her wittiness, but I found none of her jokes or sentences funny and I’m not that hard to please.

None of the other characters really interested me except for Angela because I never met a real live person like her, someone who always expects the worse of people and just generally hates them (except for Kami for some strange reason). However, I can’t really say I like Angela either because sometimes, her attitude annoyed me to no end, although it was entertaining to read.

I think the main problem I had with Unspoken was that the entire plot takes too long to develop. About one-hundred and fifty pages in Unspoken could be easily deleted because they were pretty much pointless. They were filled with stories about the Lyburns which didn’t really tell readers anything, pointless and amateur “investigations” by Kami, boy drama, and school drama.

Most of the book is focused on Kami and Jared’s relationship, which is understandable, but that just doesn’t appeal to me. I don’t get how they can’t stand to touch each other when they have been together for years in mind and knows everything there is to know about the other person. It just doesn’t make sense – shouldn’t you be glad that the faithful friend that was always on your side was real? I might be scared at first like they two were, that someone I thought was just my imagination knows all my deepest, darkest secrets, but I would be happy to gain a loyal friend that turned out to be real and not my imagination, proving that I was sane after all.

Don’t get me wrong – I really loved the whole concept of Unspoken. (Who wouldn’t want to find out that their imaginary friend is real after all?) It’s just Unspoken isn’t the book for me, although I really don’t know why. Since a majority of people loved Unspoken, go give it a try. Maybe you’ll like it a lot better than I did.