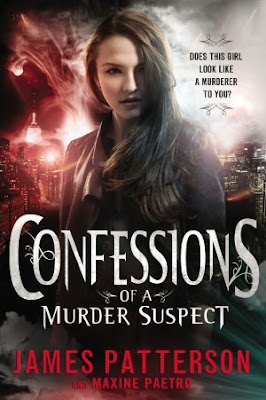 I’m not sure I loved my parents,
On the night Malcolm and Maud Angel are murdered, their daughter, Tandy, is one of the last people to see her powerful parents alive.
I’m not sure they loved me,
Tandy and her brothers are the only suspects, and as she begins to remember flashes of disturbing past events, she’s forced to ask the question: What is the Angel family truly capable of?
But I’m going to find out who killed them – even if it was me.
Returning to the genre that made him the world’s best-selling author, James Patterson introduces a teen detective on a mission to uncover her family’s darkest secrets – and maybe confess some of her own.

First Sentence: I have some really bad secrets to share with someone, and it might as well be you – a strange, a reader of books, but most of all, a person who can’t hurt me.

What attracted me to Confessions of A Murder Suspect was the fact that it was all over Barnes & Noble’s shelves everywhere and that amazing cover. The “Does this girl look like a murderer to you?” slogan also helped increase the mystery of the book. Add the name “James Patterson” and I was sold; I just had to read the book.

After I obtained Confessions of A Murder Suspect from the long wait-list on the library request list, I quickly started reading it. I couldn’t wait to see what was so great about James Patterson’s writing. (This is my first James Patterson book.) However, while I was reading Confessions of A Murder Suspect, the one thought constantly on my mind was how is it possible that James Patterson, the man constantly raved about with all those advertisements featuring his books on television, wrote such an awful book like this?! It was like he constructed random sentences together that looks totally fine apart, but doesn’t flow or work together when you write them down. The dialogues were flat and it just didn’t work. Reading Confessions of A Murder Suspect was plain torture; reading the book was like dying a slow and painful death.

The main problem was that I couldn’t connect with any of the characters. There was no opportunity to. I felt that I was only in the background watching the Angel family go through all their problems. Sure, I liked the fact that Tandy addressed us readers since she was basically telling her story to us, but it didn’t help me connect with her at all. Everyone was too perfect and flat.

Another problem in Confessions of A Murder Suspect was nothing was explained. Shouldn’t there be things not explained since it’s a mystery novel after all? you’ll probably wonder. Well, when I say nothing was explained, I mean the weird Angel family terms. For example, when Tandy brought up Big Chop, I was wondering what is that? (The book didn’t hint that Big Chop was anything related to food by the way.) Turns out it was any sort of major punishment Malcolm and Maud gives out to their kids when they do something wrong – and it took me more than ten chapters to figure it out because nothing was ever explained.

If you don’t want a huge spoiler, then I suggest you skip this entire paragraph. The reason behind Malcolm’s death didn’t even make sense. Maud was going to drink poison and die (since she had stage four cancer that she can never recover from and massive debt so why not off herself?), but at the last minute, Malcolm did it too because, according to Tandy, they both have “true love.” Um, excuse me? I didn’t know that Malcolm cheating on Maud with his son’s current girlfriend and Maud cheating on Malcolm with a woman is considered “true love.” Please excuse me for a minute while I gag.

The ending was such a disappointment. I felt like I was completely cheated out of a real ending. There were also lots of loose ends. What happened to Matt? Will we ever get the full story of Tandy’s mysterious past? Who will take care of all of them? At this point, I don’t even want to know. When I see the next book in the Teen Detective series on the Barnes & Noble’s bookshelves, I’m going to run far far away.

I highly doubt I’ll read another James Patterson book. People told me that the first three books of his Maximum Ride series was so amazing, but after reading Confessions of A Murder Suspect, there is absolutely no way I’ll read any of his other books. I rather read books by other authors that are actually worth my time.

« Book Review: Who I Kissed – Janet Gurtler
Book Review: Through to You – Emily Hainsworth »