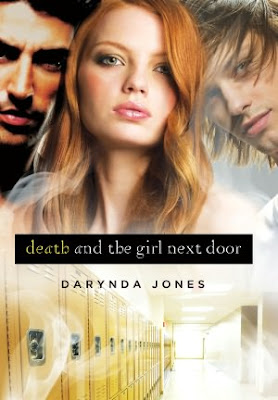 Ten years ago, Lorelei’s parents disappeared without a trace, and she is finally beginning to accept the fact that they’re never coming back. Life must go on. She’s got her grandparents and the support of her best friends, and high school is not quite as painful as she thought it would be.
But this is what happens when you fall for the angel of death.
Until the day the school’s designated loner, Cameron Lusk, beings to stalk her, turning up where she least expects it, standing outside her house in the dark, night after night. Things get even more complicated when a new guy – terrifying, tough, sexy Jared Kovach – comes to school. Cameron and Jared instantly despise each other, and Lorelei seems to be the reason for their animosity.
Life as she knows it is about to change forever.
What does Jared know about her parents? Why does Cameron tell Jared he can’t have Lorelei? And what will any of them do when Death comes knocking for real?

First Sentence: The small town of Riley’s Switch, New Mexico, had only one coffeehouse, so that’s where I sat with my two best friends, knowing beyond a shadow of a doubt that only two of us would make it out of there alive.

Death and the Girl Next Door is a DNF book for me at page 159, halfway through the book. I don’t even know how I managed to get that far. Why? Two main reasons: the messy plot and Lorelei.

First, the plot made absolutely no sense whatsoever. In fact, it got so ridiculous that I just rolled my eyes, sighed in disbelief, slammed the book shut, and never opened it up ever again. Things just appeared out of random and nothing made sense. I felt that the author had no clue on what she was doing – things were just getting thrown in and never speculated.

The way the characters just think also annoy me to no end. Why is it that all the young adult books I’ve read lately only cares if a guy is hot? If a guy is hot, then he is allowed to be a total jerk, get away with murder, and is allowed to try to kill you (Hush, Hush anyone?). But no worries, he’s hot so it’s okay. What? Well, it’s the same with Death and the Girl Next Door. Jared was sent on Earth to kill Lorelei, but didn’t for some strange reason. Lorelei finds out about Jared’s mission, and instead of focusing on the fact that he might kill her at any moment to get back to where he belongs, she ogles over his gorgeous looks. What.

Lorelei is as dumb as Nora in Hush, Hush. There were several scenes in which it was so glaringly obvious something was wrong/important/posting warning signs and Lorelei just ignored it. To think that Lorelei is a prophet and related to Joan of Arc and Sappho is a huge insult to them. I don’t think Joan of Arc or Sappho ever thought with their hormones, so why is Lorelei, who is related to them both, do that? It just annoys me when characters lose their mind just because a hot guy appears.

Also, what kind of teenager describes a guy’s hotness as supernova? Of course Lorelei does.

I’m so glad I saved $10 and didn’t buy the book since I thought the cover was cute and adorable. It’s an additional $10 towards buying other books that’s worth the money. As you the people who are tempted to read Death and the Girl Next Door, I recommend you avoid this book like it’s the plague.