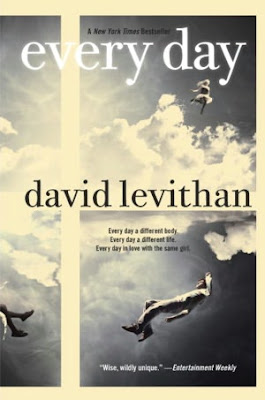 Every day a different body. Every day a different life. Every day in love with the same girl.
Every morning, A wakes in a different person’s body, a different person’s life. There’s never any warning about where it will be or who it will be. A has made peace with that, even established guidelines by which to live: Never get too attached. Avoid being noticed. Do not interfere.
It’s all fine until the morning that A wakes up in the body of Justin and meets Justin’s girlfriend, Rhiannon. From that moment, the rules by which A has been living no longer apply. Because finally A has found someone he wants to be with-day in, day out, day after day.
With his new novel, David Levithan has pushed himself to new creative heights. He has written a captivating story that will fascinate readers as they begin to comprehend the complexities of life and love in A’s world, as A and Rhiannon seek to discover if you can truly love someone who is destined to change every day.

First Sentence: I wake up.

Every Day is truly a beautiful book. It’s one of those books who manages to fit tons of philosophical quotes and engages you into the story at the same time. It challenges you and also tries to change your view on life.

I love the concept of Every Day. Every day, A wakes up in a new body and never lives in the same body twice. One day he woke up in Justin’s body, meets Justin’s girlfriend Rhiannon, and falls in love all in the same day. From then on, he tries to make their relationship work. She’s the first person he’s ever told about his circumstances and the first person he really loves.

As much as I want to hate Rhiannon for her on and off feelings for A, I can also understand her completely. In fact, one of my first thoughts when A mentioned that he loves Rhiannon (who is obviously a female), but also loved a guy in the past, was what gender is A? Does he/she even have a gender because he/she lives in other people’s bodies? The he/she part then made me refer to A as an it, which doesn’t seem right. I don’t mean to sound so judgmental, but I’m used to society’s rules for classifying people according to their gender that way.

I also understand Rhiannon’s problem with A being in a new body every day. When you think about your significant other, you want to refer to him/her with a particular image, not one that is constantly changing. To have your lover in a new body everyday – a stranger’s body where you don’t know what they’ve been doing with it – is disgusting, to put it kindly.

The only thing I had a problem with in Every Day wass how the author seems to enforce his opinion on you. The main thing David Levithan strongly implied in Every Day was judge everyone as an individual of their own, not by gender, looks, etc. I’ll normally agree with him, but if you put that context into A’s case, I’m afraid I just can’t agree.

However, despite the above, I love the way David Levithan writes about A’s experiences in different bodies. A experiences life as a drug user, football player, a beautiful girl, a depressed student, and even a home-school person’s body. Each of their lives are different and opens up the reader’s eyes to what different people face everyday.

I’ll highly recommend Every Day to everyone. It’s a book that makes you think, experience, and greatly enjoy.

« Stacking the Shelves [5]
Book Review: Reflected in You – Sylvia Day »