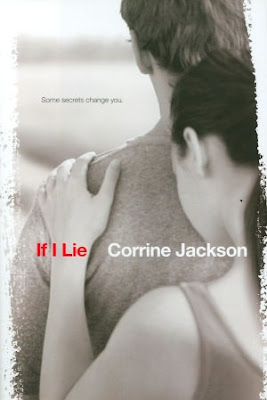 Quinn’s done the unthinkable: she kissed a guy who is not Carey, her boyfriend. And she got caught. Being branded a cheater would be bad enough, but Quinn is deemed a traitor, and shunned by all of her friends. Because Carey’s not just any guy – he’s serving in Afghanistan and revered by everyone in their small, military town.
Quinn could clear her name, but that would mean revealing secrets that she’s vowed to keep – secrets that aren’t hers to share. And when Carey goes MIA, Quinn must decide how far she’ll go to protect her boyfriend…and her promise.

If I Lie is another book that made me hate every single character that ever existed in the book except for the main character, Quinn in this case, and the one true friend who stuck by their side.

Many people recommended If I Lie to me when they saw I borrowed it from library from my Stacking the Shelves post. I was secretly wondering: what’s the big deal? It’s just a book about a girl accused of cheating on her boyfriend when she didn’t! Well, I now regret thinking that. If I Lie is not just any book. It’s a book that tugs on your heartstrings and makes you wonder if you could have been one of them. It casts view on how society works in a whole new light.

I don’t know how Quinn looks up to Carey so much after what he asked her to do. Deep down, some part of him must realize that what he’s asking Quinn to do is plain selfish, especially in a small Marine town. Quinn is so selfless and loyal to Carey that it hurts. If I was in her position, I wouldn’t have last a week.

I wanted to like Blake, but I couldn’t, not really. Shortly put, he’s a coward. I understood the position he was in, but how you just stand by watching someone get bullied, harassed, and break, especially since you share some of the blame? Ugh.

I love George. He’s always there to help Sophie and can truly see her for who she is. I love their cute little arguments; it made me smile foolishly while reading. George is a person I’ll love to have on my side.

The ending of If I Lie was powerful and touching, but it still felt incomplete. I wanted Jaime’s reaction to the news. I want to know if Sophie and Blake can ever rebuild what they had. I want to know more about Angel. I just wanted more. I’ll be happy if there was a sequel.

I’ll love to confidently say that if I was Sophie’s friend, I would stick by her side through the thick and thin when the issue pops up unlike her friends. However, I really don’t know. In reality, I’ll probably be like Angel, questioning and half-believing, but overall, not be willing to stick around. Does this make me a bad person? Probably. Things like this shows how much damage rumors can cause.