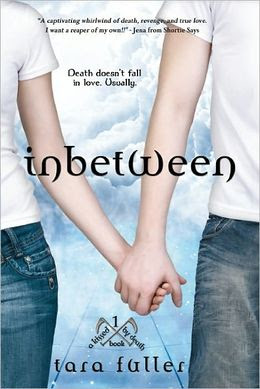 Since the car crash that took her father’s life three years ago, Emma’s life has been a freaky — and unending — lesson in caution. Surviving “accidents” has taken priority over being a normal seventeen-year-old, so Emma spends her days taking pictures of life instead of living it. Falling in love with a boy was never part of the plan. Falling for a reaper who makes her chest ache and her head spin? Not an option.
It’s not easy being dead, especially for a reaper in love with a girl fate has put on his list not once, but twice. Finn’s fellow reapers give him hell about spending time with Emma, but Finn couldn’t let her die before, and he’s not about to let her die now. He will protect the girl he loves from the evil he accidentally unleashed, even if it means sacrificing the only thing he has left…his soul.

First Sentence: “Tell me again. How did you miss the mark?” I shoved my hands in my pockets and pressed my lips together to keep from grinning.

I’ll be really honest – before I even started reading Inbetween, I had major doubts about this book. I have this rockky relationship with books published by Entangled Teen (Lux series anyone?) and I know that that’s an extremely unfair way to judge a book without trying it, but I just couldn’t help it. Add a love story with reapers into the mix and you got a very iffy book that could go either way.

Inbetween is told from two different points of view: Finn and Emma. Despite the book being told from two different points of view, Tara Fuller still managed to maintain tons of pretense and mystery to keep me reading on so I can find out why certain things were happening. Once it’s revealed, Inbetween caused me to smack myself on my head and think, how can I not see that the first place?

What I liked about Inbetween is that you can’t really choose a side. Sure, Emma doesn’t deserved to be stalked, harassed, and almost get killed constantly by Maeve, but with how Emma stole Maeve’s second chance at life (even though she didn’t mean it), it’s just, I don’t know. I can understand why Maeve does what she does, but I can’t say that she is entirely justified for her actions. I also can’t help but feel sorry for Maeve, although 30% of the time, she deserved to get her second chance at life snatched away from her due to her horrendous actions.

And Cash. Oh, Cash. I’ve never been a fan of the tortured hero in books. It just doesn’t work for me. However, in Inbetween, I find myself understanding Cash and why he is the way he is. I adore how he puts Emma before everything else.

One thing I’m majorly thankful for was that there was unbelievably no aspect of any kind of religion in this book. That is simply amazing. When someone hears the words “heaven and hell” put together, they’ll automatically think of religion, but in Inbetween, we got none of that. And I’m very happy for that because I highly doubt I could have finished any book with tons of forced religion stuff put into it (ahem Grave Mercy).

The only thing that kept me from giving Inbetween a rating of four out of five was the fact that I wasn’t really clear with the world-building in Inbetween. So many things weren’t explained. Why do little kids automatically go straight to Heaven unlike the teenagers who are immediately rushed to the Inbetween? Why not just get rid of all the shadows by getting rid of the Inbetween altogether? Why can only ten people get a chance at second life each year in the Inbetween? The list goes on. Hopefully, the world of Inbetween gets exploded more in the next book.

Despite problems with the world-building, I can’t wait to get my greedy hands on Blessed, the next book in the Kissed By Death series. The book is going to focus specifically on Cash (-squeals-) and Anaya. I also want to know how Emma would take Finn’s news, if he ever decides to tell her. Next summer can’t come fast enough!

And after Blurred? Well, all I can say is that Tara Fuller better write that sequel in Easton’s point of view!