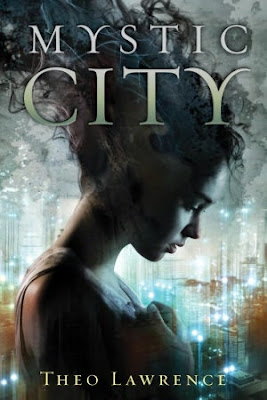 A Manhattan where magic is real and true love can change the world.
In this Manhattan, also known as Mystic City, the rich and the powerful live in skyscrapers called the Aeries. The poor live far below, in the squalor of the Depths, alongside magic-wielding mystics who provide the energy that keeps the city pulsing.
High in the Aeries, Aria Rose is madly in love with Thomas Foster.
Or so she’s been told.
Aria wakes one day with huge gaps in her memory. She doesn’t remember carrying on a secret romance with Thomas, the son of her father’s sworn enemy, much less falling in love with him. And now she and Thomas are engaged, pledged to a union that promises to end the bitter political rivalry between their families once and for all.
Then Aria meets Hunter, a gorgeous rebel mystic who holds the key to her past. But as she begins to unlock the dark secrets between her memory loss, she risks losing her one true love forever.

Just look at that cover. It’s gorgeous. I love the way the cover model’s curly hair floats upwards towards the sky and the city of Manhattan reflected in the background. It’s a book that lures you in by the cover alone.

Theo Lawrence really knows how to write with lots of imagery. I live in New York City so I know how Manhattan looks like already because (of course) I’ve been there, and his future look of Manhattan is even better. Imagine there being no MTA, no subway delays, and quick transportation! (Just so all you non-New Yorkers know, it takes at least two hours to get from the end of Brooklyn all the way to Queens. And that’s not counting Bronx.) And imagine it all being free! However, the only downside is that you can be tracked at all times.

One thing that didn’t make any sense for me at all was the broad canals in the depths. I concluded that the Depths were actually the places where the subways used to run, which isn’t as big and wide as Mystic City made it out to be, unless Aria’s not talking about the actual tunnels, but the transferring platforms themselves. However, Mystic City made the Depths sound like they’re really deep underground, so I don’t know. People that don’t live in New York City probably won’t realize this problem, but since I live in New York City, I want the full details of Aria’s world.

The main reason why I gave Mystic City a 3.5 rating instead of a 4.0 rating was because of how long it took Aria to figure out what was really going out. The summary itself implied what really happened and when the first clues came, Aria just kept ignoring its meaning and wanting to find out more when the truth was so glaringly obvious in front of her face. In fact, it took a little more than half the book for Aria to figure out the truth of what was really going on and she isn’t close to stupid…so far.

Another thing that didn’t make sense is the way and why the the long-going family feud ended. Why would Aria’s father suddenly support his enemy, the Fosters, if Aria and Thomas’s romance isn’t even real the first place? Do they both have other political agendas? I hope this issue gets explored in the next book.

Also, since the current governor, the Roses, and the Fosters seem to control over 75% of the population, why not just take everything by force? Why not just fix the election? Why try to win the election fairly? Most of the city and the people are under their control already, so why not try to be a dictator? That also just doesn’t make sense.

The thing about Mystic City though is that there are so many ways where the sequel can go. Will Aria’s plan succeed or would her family manage to twist around her words? Will whoever wins the election even matter with the Roses and Fosters holding that much power? Can’t wait until the sequel comes out so I can find out!