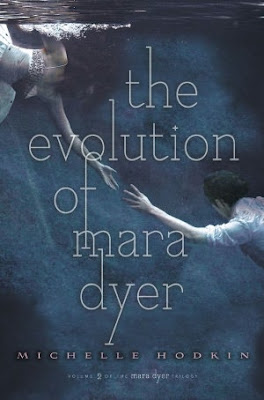 Mara Dyer once believed she could run from her past.
She can’t.
She used to think her problems were all in her head.
They aren’t.
She couldn’t imagine that after everything she’s been through, the boy she loves would still be keeping secrets.
She’s wrong.
In this gripping sequel to The Unbecoming of Mara Dyer, the truth evolves and choices prove deadly. What will become of Mara Dyer next?

First Sentence: I woke up on the morning of some day in some hospital to find a stranger sitting in my room.

Some books leave you so speechless and shocked that all you can do is blink and wonder why. (Not why is it so bad, but why is it so good and why those things happened.) The Evolution of Mara Dyer is that book.

After reading The Unbecoming of Mara Dyer, the first book in the Mara Dyer series, and finding myself hating it, I highly doubted that I would read the sequel, even if it had another stunning cover. I didn’t like Mara Dyer, her relationship with Noah didn’t ring true to me, and I had to nearly kill myself just to finish the book. However, people who also hated the first book like I did loved the second book, so I was like, okay, why not give it a try? I’m glad I did.

The Evolution of Mara Dyer is told from Mara Dyer’s point of view (obviously), and when things started happening to her, but she isn’t sure if it really happened because people don’t believe her, but it looks like it actually did happen, but she might be wrong, I didn’t know whether to think Mara was insane or that she was, in fact, sane and something was seriously wrong with her life. The Evolution of Mara Dyer constantly kept me on edge.

To make matters worse/better (depends on if you like horror), tons of things crept me out (and I do not get crept easily; blame that on Criminal Minds) because all these things were happening and they just. Didn’t. Make. Sense. Why didn’t they make sense?! Everything was then revealed in the end.

Unlike The Unbecoming of Mara Dyer, there was more focus on the plot instead of the romance. However, I disliked how Mara was always relaying on Noah to fix her problems for her and protect her. Yes, I know she’s in a tough situation and she can’t escape, but to be so clingy and helpless just doesn’t ring well with me.

Noah is always there for Mara and loves her desperately, but that causes a problem for me. When they first met in The Unbecoming of Mara Dyer, it was like insta-love. Now in The Evolution of Mara Dyer, I can see that Michelle Hodkin worked hard to improve her novel, but since Noah and Mara’s relationship is based on insta-love, I just don’t get why Noah would give up everything to keep her safe and would love her that much when there were so many other girls out there that he could get.

The cliffhanger at the end of The Evolution of Mara Dyer is intense. I’ve been running ideas through my mind on how the series could end, and so far, none of them are good. I wonder how things will all turn out.