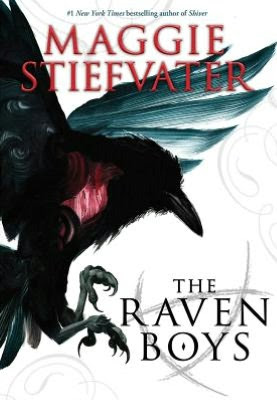 “There are only two reasons a non-seer would see a spirit on St. Mark’s Eve. Either you’re his true love…or you killed him.”
Every year, Blue Sargent stands next to her clairvoyant mother as the soon-to-be dead walk past. Blue herself never sees them – until this year, when a boy emerges from the dark and speaks directly to her.
His name is Gansey, and he’s a rich student at Aglionby, the local private school. Blue has a policy of staying away from Aglionby boys. Known as Raven Boys, they can only mean trouble.
But Blue is drawn to Gansey, in a way she can’t entirely explain. He is on a quest that has encompassed three other Raven Boys: Adam, the scholarship student who resents all the privilege around him; Ronan, the fierce soul who ranges from anger to despair; and Noah, the taciturn watcher of the four, who notices many things but says very little.
For as long as she can remember, Blue has been warned that she will cause her true love to die. She never thought this would be a problem. But now, as her life becomes caught up in the strange and sinister world of the Raven Boys, she’s not so sure anymore.
From Maggie Stiefvater, the bestselling and acclaimed author of the Shiver trilogy and The Scorpio Races, comes a spellbinding new series where the inevitability of death and the nature of love lead us to a place we’ve never been before.

First Sentence: Blue Sargent had forgotten how many times she’d been told that she would kill her true love.

I’ve never read any book with characters so conflicted with themselves and their life like the ones I’ve just read in The Raven Boys. I think I’m a fan of Maggie Stiefvater now. Please note that I’m not easily a fan of an author; I have very high expectations.

Let me start with my history of reading Maggie Stiefvater’s books. I remember borrowing The Scorpio Races one day, trying to get past the second chapter, but I just couldn’t do it. I discussed it with a book loving friend of mine and she told me that she agreed, it’s just the writing style that doesn’t engage. Flash-forward six months and I decided to give Maggie Stiefvater’s books another try – this time with Shiver. I loved the beginning of Shiver, but not the rest of it.

By that time, I already had The Raven Boys in my hands, so why not just give it a try? To my amazement, I enjoyed the entire book. It was conflicting, mysterious, and sometimes confusing until you read on and find out everything. There was jaw-dropping moments and lots of moments where you just wanted to smack someone.

I love the whole if a non-seer sees a spirit on St. Mark’s Eve, they either killed him or is his true love idea that lured me into the book the first place. Of course the main female character who was told this, Blue, doesn’t know who she would kill or who her true love is yet since this is only the first book in the series.

As for who I want Blue to end up with, I don’t know yet. At first, I thought Adam was perfect for her. He was nice, polite, and not full of himself. However, at the end, there seemed to be a lot of dark sides about Adam that we don’t know about yet. All Adam cares about is living around things he accomplished. He doesn’t want help and refuses help when Gansey offers it. I can understand this, but when it’s a life or death situation and he refuses to acknowledge that he needs help, it’s eventually becomes plain stupid.

As for Gansey, there’s so many things about him that is just not clear. We next to never get to see the real Gansey, and I know for a fact that relationships have to be built on something real or the whole foundation will collapse. I’m not sure if I’m looking forward to finding out about the real Gansey – so many things about him is just so fragile.

I know for a fact that I don’t trust Neeve, and I doubt I ever can. Something about someone whose biggest goal is to gain more fame when they already have enough fame to last long after their lifetime rubs me the wrong way. I can also tell that Neeve is hiding many secrets and if I was Blue, I will stay far far away from her.

I want to know more about Ronan. There are so many mysteries in him that just isn’t solved and I want to know what. He’s hiding so many things like the reason of his father’s death and how exactly he got Chainsaw the raven that I just want to know. There’s also a bad boy vibe I get from him that I can’t help but like.

Now I have to talk about a topic in the book that just stunned and made me want to smack someone. Skip this paragraph if you don’t want a minor spoiler. I don’t get how Adam’s mother can just stand there and accept the fact that her son is getting beat up by her husband. I get how she constantly makes excuses for her abusive husband (since that’s how abusive relationships work), but to not help her son and cause her son to be abused? Adam should have left his house long, long ago. I’ll say that he’s lucky that his mother won’t ever talk to him ever again. He’s better off with someone who genuinely cares about him and his safety.

I will definitely read the next book in the Raven Cycle series. Maggie Stiefvater’s new series is addicting, mysterious, and pure conflicting. In fact, it can’t come out fast enough.

« Stacking the Shelves [6]
Mini-Book Review: In Bed With A Highlander – Maya Banks »