This week, I can’t wait for a sequel coming out in February. It’s a retelling of Little Red Riding Hood and Sailor Moon together. Yes, I’m serious. 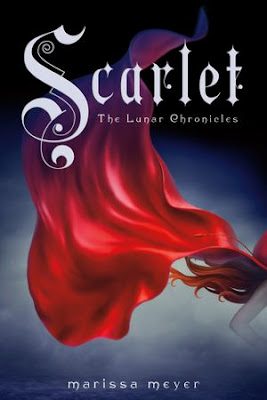 Cinder returns in the second thrilling installment of the New York Times bestselling Lunar Chronicles. She’s trying to break out of prison – even though if she succeeds, she’ll be the Commonwealth’s most wanted fugitive.
Halfway around the world, Scarlet Benoit’s grandmother is missing. It turns out there are many things Scarlet doesn’t know about her grandmother and the grave danger she has lived in her whole life. When Scarlet encounters Wolf, a street fighter who may have information as to her grandmother’s whereabouts, she has no choice but to trust him, though he clearly has a few dark secrets of his own.
As Scarlet and Wolf work to unravel one mystery, they find another when they cross paths with Cinder. Together, they must stay one step ahead of the vicious Lunar Queen who will do anything to make Prince Kai her husband, her king, her prisoner.

After rereading Cinder with that ending, I automatically wanted to know what happens next. Is Cinder safe? What will Kai do? Does the Lunar Queen declare war on the Commonwealth? And where does Scarlet come in into this huge mess?

Like Cinder‘s cover, Scarlet‘s cover is unique in its own way. Here, we see Scarlet’s red cloak, a huge part of her in Little Red Riding Hood with a hint of her hair.

Man, I can’t wait until Scarlet is released. The suspense is killing me.