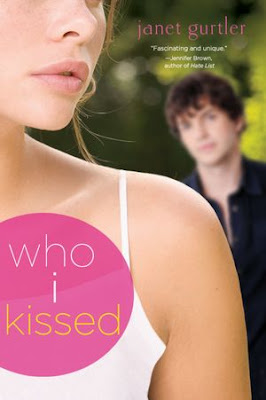 She never though a kiss could kill…
Samantha didn’t mean to hurt anyone. She was just trying to fit in…And she wanted to make Zee a little jealous after he completely ditched her for a prettier girl. So she kissed Alex. And then he died – right in her arms.
Sam is now the school pariah and a media sensation. Consumed with guilt, she’ll have to find strength that goes way deeper than the fastest time in the 200-meter butterfly. Because if she can’t figure out how to forgive herself, no one else will either.

First Sentence: A loud thunk from the viewing area startles me as I flip-flop from the locker room to the pool deck.

The first thing I have to say is that I love the idea of Who I Kissed. Someone getting killed by a simple kiss? How is that possible? Well, little do you know, it is entirely possible.

The hardest part of reading Who I Kissed was watching Sam head toward a downward spiral and being helpless to do anything about it (since I don’t exist in the book obviously). Sam isolating herself, quitting swimming, and feeling guilty got me feeling worried about her and wondering how she would ever recover – if she managed to. I was totally expecting that thing with Casper to happen (since something similar to Sam’s situation happened in a book I’ve read before), but it didn’t make it any easier for me to read. I’ll love to say how can Sam be such an idiot?, but you never know until you’re in Sam’s position suffering from a huge mass of guilt and depression.

I didn’t like Zee at all. Sure, I understood his whole position in the book, especially since Alex was his best friend, but to go pursuit Sam when he found out that he could (trying to describe it as vaguely as possible so I wouldn’t spoil anything) was just an ugh moment for me. It tells me that Zee would have done nothing about his feelings for Sam if the truth was never revealed and that annoys me to no end. He was simply a coward and nothing can redeem him in my eyes.

One very noticeable thing in Who I Kissed was the amount of punctuation mistakes. I counted at least five mistakes, all of them missing “.” or quotation marks at the end of the sentence. There might have been more mistakes that I’ve never noticed. Hopefully Janet Gurtler’s future books would be edited better.

I love that Janet Gurtler was inspired and worried about her son’s peanut allergy in a world that preferred convenience to safety so much that she wrote Who I Kissed based on his allergy. I’ve never realized how dangerous our world was for people with peanut allergies. My elementary school, middle school, and high school served peanut butter sandwiches everyday like it was nothing. I don’t know any of my friends’ allergies, and in fact, I might have given them something they were allergic to and didn’t even know it. Who I Kissed made me open up my eyes and realize – the problem is serious.