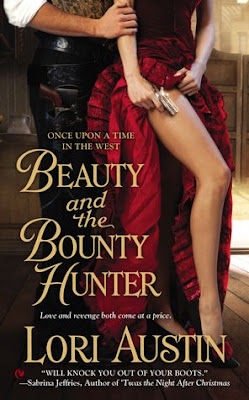 Beauty and the Bounty Hunter
Author: Lori Austin
Series: Once Upon A Time in the West #1
Genre: Historical Romance
Publisher: Signet Eclipse
My Rating:

Love and revenge both come at a price.
Cathleen Chase is no killer – but as Cat O’Banyon, she is a ruthless bounty hunter who always gets her man. Catching one lowlife after another, she continues her search for the only man she really cares to locate. The one whose voice she will never forget; the man who murdered her husband. She’ll stop at nothing to find him.
Con artist Alexi Romanov taught Cat every trick she knows. He is a master of deceit, disguise, and desire. He’s difficult to trust, and even more difficult to resist, but he has news she can’t ignore. The man she’s after has placed a bounty on her head. To get him before he gets her, she’ll have to team up with Alexi again…and just like before, the two of them together are nothing but trouble.

When I first had a glimpsed of the cover of Beauty and the Bounty Hunter, I knew I had to get my hands on it asap. Just look at those western outfits and that oh-so-shiny-and-tiny gun in that girl model’s hand! Those red-bowed high-heels match that gorgeous long red dress too. -drools-

I connected with Alexi right from the very first sentence I’ve read written in his point of view. I don’t know why, but there’s just something about him. Outside, he’s so cocky and confident, but inside, he’s really insecure. You can’t help but fall for a guy like that. However, with that playboy attitude of his, I could understand why Cat kept him a safe distance from her. I’m happy that he realized his feelings for her and managed to win her.

Every time Cat and Alexi finds themselves in a deep, deep, mess, I can’t help but pray that they’ll get out of it safe and sound. So many parts of the book made me uneasy since Alexi could be shot down or shoved into jail at any minute. (That’s why you shouldn’t con people everywhere Alexi.) Beauty and the Bounty Hunter constantly put me on edge because I worry about Cat and Alexi’s safety.

I feel sorry for Malcolm. He reminds me of Lenny in Of Mice and Men with how he follows Alexi’s every order and his huge size. The only thing that makes different Malcolm different from Lenny is that Malcolm doesn’t have a mental problem, at least, I don’t think he does. I wonder if Malcolm will have his own book, and if so, what his thought process is like.

I also feel sorry for Ethan. I can’t say much more or I’ll spoil his role in Beauty and the Bounty Hunter, but I’ll say this: hopefully he won’t be in denial forever.

I’ll definitely read the next book in the series, which is focused on Ethan. I want to know more about him, his history, and why he is the way he is.