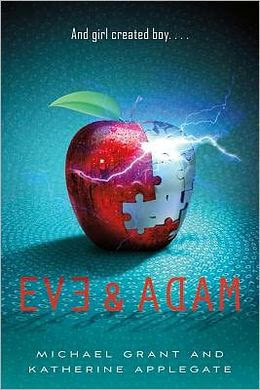 In the beginning, there was an apple.
And then there was a car crash, a horrible, debilitating injury, and a hospital. But before Evening Spiker could regain consciousness, there was a strange boy checking her out of the hospital and rushing her to Spiker Biopharmaceuticals, her mother’s research facility. Once there, Eve has to heal and cope with an eerie isolation only interrupted by her overbearing mother, a strange group of doctors, and the mysterious boy who brought her there.
Just when Eve thinks she will die – not from her injuries, but from boredom – her mother gives her a special project: Create the perfect boy.
Using an amazingly detailed simulation that is designed to teach human genetics, Eve starts building a boy from the ground up: eyes, hair, muscles, even a brain, and potential personality traits. Eve is creating Adam. And he will be just perfect… won’t he?

First Sentence: I am thinking of an apple when the streetcar hits and my leg severs and my ribs crumble and my arm is no longer an arm but something unrecognizable, wet and red.

I was very excited to read Eve & Adam. With the premise of Eve creating her own perfect boy in modern times; who would have thought that was possible? Add that appealing cover, and you’ve got me sold. (If you have the hardcover of Eve & Adam, I advise you to check out the lovely red hardback cover.)

Sadly, Eve & Adam was boring. It didn’t engage me or pull me right in into the story. In fact, we didn’t even meet Adam, the Adam in the title, until a little over one-half of the book. Parts of the book wasn’t even needed, I mean, what did Maddox’s drug adventures have to do with anything?

I also didn’t connect with any of the characters. I felt like I was only watching Eve, Solo, and Adam going through events, but never relating to them. Eve, Solo, and Adam’s voices also sounded alike. If you erased the names on top of the page where it tells you who is telling the story that particular chapter, you won’t be able to recognize who is who. All three voices pretty much blend in together.

The ending also felt like such a cop-out. I can’t say anything more or I’ll really spoil the ending, but I just felt cheated of a real ending. I was anticipating what was going to happen in the end – particularly on what would become out of Eve and Adam’s relationship once Spiker’s secret was out – but the ending just ruined it.

I think Eve & Adam confirmed that Michael Grant’s books are just not the books for me. (I DNF his Gone series.) Also, there are rumors of a sequel to Eve & Adam, and if that’s true, I’m sadly not trying it out.