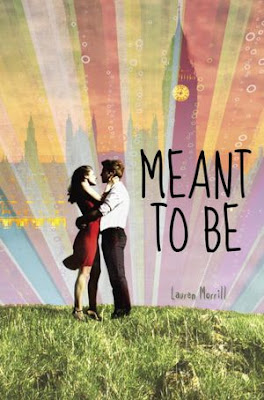 Meant to be or not meant to be…that is the question.
It’s one thing to fall head over heels into a puddle of hazelnut coffee, and quite another to fall for the – gasp – wrong guy. Straight-A junior Julia may be accident prone, but she’s queen of following rules and being prepared. That’s why she keeps a pencil sharpener in her purse and a pocket Shakespeare in her, well, pocket. And that’s also why she’s chosen Mark Bixford, her childhood crush, as her MTB (“meant to be”).
But this spring break, Julia’s rules are about to get defenestrated (SAT word: to be thrown from a window) when she’s partnered with her personal nemesis, class-clown Jason, on a school trip to London. After one wild party, Julia starts receiving romantic texts…from an unknown number! Jason promises to help discover the identity of her mysterious new suitor if she agrees to break a few rules along the way. And thus begins a wild goose chase through London, leading Julia closer and closer to the biggest surprise of all: true love.
Because sometimes the things you least expect are the most meant to be.

First Sentence: There are certain things in life that just suck.

Before I start the review, I need to say this: I’m not really a fan of contemporary romance books with no paranormal/science-fiction elements in it. There are a very very few exceptions of course, such as Anna and the French Kiss and My Life Next Door, but that’s basically it. The other contemporary romances I’ve read, I just tolerate it (but barely).

When I first saw Meant to Be, the stunning cover, and grew interested in the summary, I was hoping that Meant to Be would be one of those few contemporary romances that I will genuinely enjoy. However, it never happened.

To start with, there was something about Lauren Morrill’s writing that had me pausing every two or so pages, thinking, um, what did I just read? The main reason why is because there are tons of paragraphs focused on the tiniest details and descriptions – everything we readers don’t really have to know. I’m not talking about the descriptions of London, I’m talking about Julia’s very descriptive thoughts and actions.

And then there’s Jason. I just don’t understand how anyone could like him. He pretends to be tortured by Julia in a public museum, shoves her into a public pond (where there is probably tons of disgusting diseases you can catch in there) because she likes to swim, makes a kid stick chewed gum in her hair, and ditches her to hang out with other people. Who can honestly like a guy like that? Those small sweet moments we see of Jason can’t even come close to redeeming him. It’s harsh, but true. If he asked me out, I’ll be um, hell no, not until you yell fire in the middle of a museum, take an hour swim in the ocean, stick a piece of gum all over your own hair and shave it all off, and dump all your friends for me. Then I’ll consider it.

Julia and Jason’s relationship was also not quite clear. When did Jason start liking Julia? (I can’t figure it out. If he liked her since the beginning, then he’s a major jerk.) How will their relationship be when they’re back home? What about those popular girls that stand between Jason and Julia?

I don’t really know if I’ll recommend Meant to Be to anybody. All I know is that if you want to read a quick, sappy, cheesy, romance, then give Meant to Be a try. If you hate annoying jerky guys, then skip it.