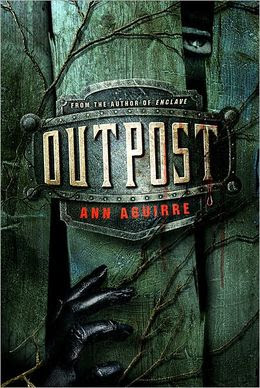 Deuce’s whole world has changed. Now living topside in a town called Salvation, she has a new set of problems. Down below, she was considered an adult and she contributed to the enclave. Now above ground, she’s viewed as a brat in need of training by the people of Salvation. She doesn’t fit in with the other girls: She hates cooking, sewing, and school. Deuce only knows how to fight.
To make matters worse, her Hunter partner, Fade, keeps Deuce at a distance. Her feelings for Fade haven’t changed, but he seems not to want her around anymore. Confused and lonely, she starts looking for a way out.
Deuce pursues and a chance summer patrols — those responsible for making sure the growers and planters can work the fields without danger of Freak attack. It should be routine, but things have been changing on the surface, just as they did below ground. The Freaks have grown smarter. They’re watching. Waiting. Planning. The monsters don’t intend to let Salvation survive, and it may take a girl like Deuce to turn back the tide.

First Sentence: I woke to the cold kiss of steel on my throat.

After I finished reading Enclave, I was a mess. How could Deuce be so stupid and not realize Fade’s hidden meaning behind his words? Will Salvation let them stay? What did the Freaks want? What ultimately happens now? All these questions were mixed up in my head – and when I finally got my hands on Outpost, I was afraid to read it because I was scared of what would happen next. I couldn’t stand it if Deuce and Fade never solve their misunderstand and spent the whole book in angst. This week, I finally overcame my fear and read Outpost, and to my disappointment, Outpost isn’t as good as Enclave was.

There was also considerably a lot less action in Outpost than Enclave. In Enclave, every page was full of dread, worry, and horror mixed in together as the group tried to survive. In Outpost, it’s just full of tons of drama, some fighting, then drama again.

Fade was also a lot less braver in Outpost. In fact, he’s gotten so soft and moody that I barely recognize him. He withdraws from Deuce over the smallest things when he could have just asked her about the truth and told her what happened. What happened to that unbreakable Fade from Enclave?

I’ve also noticed that in Outpost, there were tons of times Deuce described why Stalker acted the way he did in the past when he was the leader of his gang. That leads me to think that Ann Aguirre read the angry reviews on Enclave on how Stalker could become one of Deuce’s love interests when he was a rapist, so she wrote some passages to explain why Stalker did what he had done. Me, I had no problem of Stalker being a love interest for Deuce because I understand the world of Enclave and the circumstances people faced.

Overall, Outpost seems like a totally different book than Enclave. Despite the fact that I didn’t really enjoy reading Outpost, I’ll read Horde to see how the series end. What do the Freaks want? Will Salvation manage to survive? (I couldn’t count how many times I thought if only they had bombs in Outpost.)