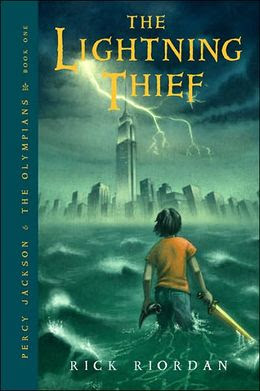 Percy Jackson is about to be kicked out of boarding school…again. And that’s the least of his troubles. Lately, mythological monsters and the gods of Mount Olympus seem to be walking straight out of the pages of Percy’s Greek mythology textbook and into his life. And worse, he’s angered a few of them. Zeus’ master lightning bolt has been stolen, and Percy is the prime suspect.
Now Percy and his friends have just ten days to find and return Zeus’ stolen property and bring peace to a warring Mount Olympus. But to succeed on his quest, Percy will have to do more than catch the true thief: he must come to terms with the father who abandoned him; solve the riddle of the Oracle, which warns him of betrayal by a friend; and unravel a treachery more powerful than the gods themselves.

First Sentence: Look, I didn’t want to be a half-blood.

I liked Percy. He managed to get several chuckles out of me while I was reading and that’s no easy feat. However, I didn’t really care about his friends, Grover and Annabeth. If they both died, I would just shrug and be like “oh well.” That being said, I felt like I had no deep connection with any of the characters in The Lightning Thief, including Percy. Maybe this book was meant to be a light fun read (since it is a children’s book after all), but I expected more, especially with all the hype surrounding the book.

The pacing was kind of slow in The Lightning Thief. The action and fighting scenes, if you can call some of them fighting scenes, could be better written with more action. The transition scenes in The Lightning Thief bored me, the only scene that really caught my attention was the casino scene since I figured out something suspicious was going on, but I didn’t know what. All the other scenes were pretty predictable with me thinking, “No, Percy, can’t you see something is weird?” and “Oh my goodness, just do it already!” The worst part was that I can’t exactly blame Percy for his actions because he’s a sixth grader.

I figured out the identity of the friend that would later betray Percy a little bit after the prophecy was revealed. It was pretty simple to figure out who it would be and when I found out I was right, I was kind of disappointed since I honestly was expecting more.

Overall, I expected more from The Lightning Thief, especially with all the hype surrounding the book. However, I decided that I am going to read the next book in the series, Sea of Monsters. I just don’t know when, but definitely not any time soon. Now off to watch The Lightning Thief movie!