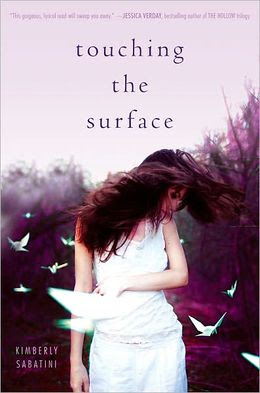 When Elliot finds herself dead for the third time, she knows she must have messed up, big-time. She doesn’t remember how she landed in the afterlife again, but she knows this is her last chance to get things right.
Elliot just wants to move on, but first she will be forced to face her past and delve into the painful memories she’d rather keep buried. Memories of people she’s hurt, people she’s betrayed…and people she’s killed.
As she pieces together the secrets and mistakes of her past, Elliot must find a way to earn the forgiveness of the person she’s hurt most, and reveal the truth about herself to the two boys she loves…even if it means losing them both forever.

I wasn’t sure what I was getting myself into when I first started reading Touching the Surface. I was originally attracted to the book when I saw it’s lovely cover on goodreads, but when I finally got the book in my hands, the cover didn’t look as appealing as it did online (like the cover of Arise by Tara Hudson). Luckily, I decided to give Touching the Surface a chance.

I’ve never read a book that made me so blind to all the other character’s feelings (okay, not exactly blind, but I could care less about how they feel) except for the main character’s feelings (just for the record, the book is told from the main character’s, Elliot’s, point of view). I know that’s unfair, especially since Elliot did some hurtful things to the people she knew, but her emotions were so strong and just plain raw that it was hard to be rational and side with other characters in the book besides Elliot.

I love the world-building. Obmil is such a fascinating place. Obmil’s landscape is built/created based on a person’s emotions (I think I had read a book with that concept too). For example, if someone is feeling happy, the setting would probably be a grassy meadow full of flowers and leafy green trees, radiating the person’s happiness. If they are angry, the landscape would probably have a cold winter storm where everything is cold and icy.

My personal favorite part of Touching the Surface is when the characters were Delving into their past life. It was mysterious (since you don’t find out what they had done in their past life until that certain part of the book) and unique (none of the books I’ve read before about the afterlife even bothered to fully mention their past life and why their soul couldn’t exactly move on the first place).

If you’re looking for a book with deep, memorable quotes with a bittersweet feeling, then Touching the Surface is the book for you.