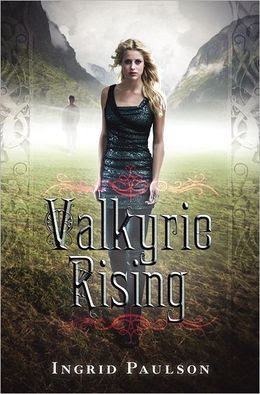 Nothing ever happens in Norway. But at least Ellie knows what to expect when she visits her grandmother: a tranquil fishing village and long, slow summer days. And maybe she’ll finally get out from under the shadow of her way-too-perfect big brother, Graham, while she’s there.
What Ellie doesn’t anticipate is Graham’s infuriating best friend, Tuck, tagging along for the trip. Nor did she imagine boys going missing amid rumors of impossible kidnappings. Least of all does she expect something powerful and ancient to awaken in her and that strange whispers would urge Ellie to claim her place among mythological warriors. Instead of peace and quiet, there’s suddenly a lot for a girl from L.A. to handle on a summer sojourn in Norway! And when Graham vanishes, it’s up to Ellie – and the ever-sarcastic, if undeniably alluring Tuck – to uncover the truth about all the disappearances and thwart the nefarious plan behind them.
Deadly legends, hidden identities, and tentative romance swirl together in one girl’s unexpectedly-epic coming of age.

What caught my attention was the beautiful mysterious cover (the mountains! The guy’s hidden face! That fog!) and the word “valkyrie.” I had no knowledge of Norse mythology so I had absolutely no clue what a valkyrie was, but was eager to find out since it sounded so awesome. After reading Valkyrie Rising, I wanted to do tons more research on them because, let’s face it, they are indeed fascinating.

One thing I’ve noticed while reading Valkyrie Rising was that the story dragged a bit. I think it’s because Ingrid Paulson includes the tiniest details in her long paragraphs. The real action also started on the bottom of page 37, and with Valkyrie Rising‘s tiny font, many people won’t get that far into the book before they give up on it.

I never met any guys in books that charmed me, flattered me, and stole my heart in less than three chapters, until I read about Tuck Halloway. He’s witty, fun, charming, cocky, and most of all, loyal. Where can you find a real life guy like that? (If you know, take me there asap.) If Tuck wasn’t in the book, I’ll be liking Valkyrie Rising a lot less. He brings sunshine into the book. (Cheesy, I know, so sue me.)

The one thing I had a problem with in Valkyrie Rising was Tuck’s missing parents. (It may not seem to be a big deal until you get to the part where his secret was revealed.) How does it make sense that Tuck’s parents let him hang out with Ellie and Graham, especially since his parents have opposite viewpoints, to put it generally to avoid major spoilers. I was expecting more of a hardship when Ellie and Tuck got back home, but to my surprise, everything was just fine, like his secret was never revealed in the first place.

I wish we see more of Ellie’s grandmother, Hilda. At the end of the book, Hilda is still this mysterious woman that we readers don’t really know about. What is she like? How does she think? What are her true goals?