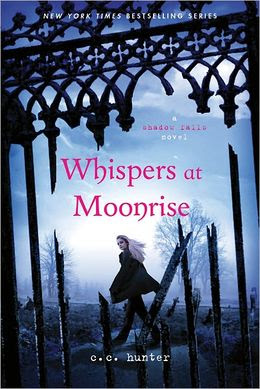 Even at a camp for supernatural teens, Kylie Galen has never been normal. Not only can she see ghosts, but she doesn’t seem to belong to any one species – she exhibits traits from them all. As Kylie struggles to unlock the secrets of her identity, she begins to worry that Lucas will never be able to accept her for what she is, and what she isn’t…a werewolf. With his pack standing in their way, Kylie finds herself turning more and more to Derek, the only person in her life who’s willing to accept the impossible.
As if life isn’t hard enough, she starts getting visits from the ghost of Holiday, her closest confidante. Trouble is, Holiday isn’t dead…not yet anyway. Now Kylie must race to save one of her own from an unseen danger before it’s too late – all while trying to stop her relationship with Lucas from slipping away forever. In a world of constant confusion, there’s only one thing Kylie knows for sure. Change is inevitable and all things must come to an end…maybe even her time at Shadow Falls.

First Sentence: Kylie Galen stood on the porch outside the Shadow Falls office, panic stabbing at her sanity.

The Shadow Falls series and I go a long way back. I remember it was one of the first books I’ve ever read since I picked up reading again because of the amazing foil covers of the series. I enjoyed Born at Midnight and Awake at Dawn well enough, but I absolutely loved reading Taken at Dusk. However, when I look back now, my reading tastes before wasn’t as good as it is now and I would have hated the first two books if I read it now. (I’m not sure if I’ll hate Taken at Dusk if I re-read it again now.) Nevertheless, I decided to pick up Whispers at Moonrise and decided to read it, only to find out that I (not surprisingly) found it boring, cheesy, and bad as hell now.

Ever since the first book, Kylie has been deciding between two guys who are madly in love with her for some unknown reason: Lucas and Derek, dating both of them at different times. This love triangle has been dragged through four different books and she will finally pick the guy she wants to be with in the next and final book, Chosen at Nightfall. Not to mention that it is quite obvious who Kylie would choose in the end. Ladies, if you have to decide between a guy who lies to you and can’t accept you for who you are and what you do and a guy who accepts you for who you are and helps you even if you reject him, who would you pick? Enough said.

So much of Whispers at Moonrise and the whole Shadow Falls series is pretty simple and cheesy. It just screams that the book is written for twelve to fifteen year olds. Well, here’s the thing, I noticed that Whispers at Moonrise use tons of profanity like “crap” and “bitch” all the time, which was completely unnecessary. In fact, I cringe in distaste every time a profanity was used and I’m eighteen. It just tells me that C.C. Hunter is just trying too hard to make Kylie and her friends sound like a teenager and majorly failing.

And oh goodness, don’t make me mention the scenes in which Kylie decides it was wise to ask her mother if she was having sex with her new boyfriend. Um, excuse me? That is wrong in so many ways and I’m positively sure I don’t have to mention why. The worse part of it is, Kylie asks her mother twice, in two different parts of the book. She desperately wants her parents to get back together. Um, girl, do you have a brain? Do you seriously want to see your mother burn your father’s underwear again (like how she did in the first book) and your father cheating on her with someone around your age? Really?

Oh and the thing that really really annoyed me: In the last book, Taken at Dusk, it was revealed that Kylie is a chameleon. Using our naturally given brain, we can easily deduct that Kylie can take properties of other supernatural creatures, hence her being a “chameleon,” using all the clues we’ve been given so far. But no, C.C. Hunter just had to make readers and teenagers seem so clueless that we don’t see what’s dangling in front of our eyes and make Kylie still not realize what being a chameleon means at the end of the book.

The thing I don’t get is how does C.C. Hunter’s Shadow Falls series have such high ratings on goodreads. Does she make fake accounts and fake them? Well, I can’t really say anything else because I was a fan of her books a little less than a year ago, but I learned from my mistake.