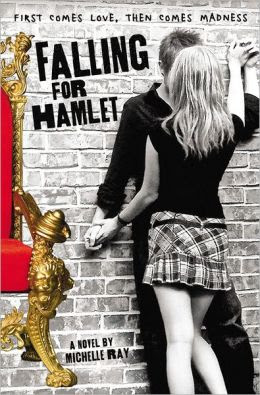 Sometimes love can make you crazy.
Meet Ophelia, high school senior, daughter of the Danish king’s most trusted adviser, and longtime girlfriend of Prince Hamlet. She lives a glamorous life and has a royal social circle, and her beautiful face is splashed across magazines and TV. But it comes with a price – her life is dominated not only by Hamlet’s fame and his overbearing royal family but also by the paparazzi who hound them wherever they go.
After the sudden and suspicious death of his father, the king, Hamlet spirals dangerously toward madness, and Ophelia finds herself told between loyalty to her boyfriend, her father, her country, and her true self.
In this stunning contemporary retelling of Shakespeare’s Hamlet from Ophelia’s point of view, debut author Michelle Ray brilliantly weaves together old and new. Filled with drama, romance, tragedy, and humor, Falling for Hamlet is a compulsively readable novel. And this time, Ophelia doesn’t die.

Warning: This review contains minor spoilers for Hamlet (although I got a feeling most of you won’t care).

I received an ARC of Falling for Hamlet through ARCycling. Thank you ARCycling! (:

The last time I’ve read Hamlet was last year in May – and not by choice. Hamlet was dreadfully required for my English class. I was forced to read the boring book and memorize a forty-two line soliloquy from it and recite it in front of my entire class. (I’m the type of person who hates presenting anything in front of everyone, not to mention raising my hand in class.) During the whole presentation, I was staring at the floor, reciting my soliloquy line by line. Reading and memorizing my lines for Hamlet was so much work, so who knew I’ll end up liking Hamlet so much in the end?

I love everything Michelle Ray did to Falling for Hamlet: the interview Ophelia did with Zara with the audience watching, the interrogation between Ophelia and two detectives that made me feel like I was watching an episode of Law & Order: Criminal Intent, and most of all, how everything from Hamlet just clicked and made sense in Ophelia’s version of the story. (I mean, I’m sure I’m not the only one who ever wondered why Hamlet will call Ophelia a whore one moment, and the next go running to her funeral sobbing that he loves her. However, in Michelle Ray’s Falling for Hamlet, everything was explained.)

Since I already knew the story of Hamlet, I loved spotting hints and clues everywhere while I was reading Falling for Hamlet that would eventually lead up to the climax of the story. For instance, there were tons of given signs of Gertrude’s cheating: her cheeks went ablazed whenever the word “cheating” was mentioned, she doesn’t care that her husband wasn’t spending as much time with her anymore, she doesn’t want to find out why her husband died, etc.

Everything is so different in Falling for Hamlet simply because we see Ophelia’s point of view on things instead of just watching things happen like the Hamlet play. There are addition scenes where in the play, Ophelia was supposed to know nothing about.

I really connected with Ophelia. If I was in her position, I would be so conflicted in making my decisions too. No one should ever choose between the one they love or their family. Like I studied in class, Ophelia was pushing around and used as a scapegoat in both Hamlet and Falling for Hamlet. I wonder if that poor girl will ever get a break.

I’m really conflicted with Ophelia’s portrayal of Hamlet. Sometimes, I think aww, he’s so sweet, but most of the time, I’m thinking dump that dude girl! The way Hamlet treated Ophelia was just not justified. I mean, telling your girlfriend/ex-girlfriend that you killed her dad because he thought that her dad was his uncle at the time, but don’t worry, he’s sure his uncle is guilty of killing his father the same time she just found out that he killed her dad is like what are you thinking boy?! Not to mention, Hamlet looking at other girls while dating Ophelia is just plain no. Overall, at the end of Falling for Hamlet all I felt for Hamlet was good riddance.