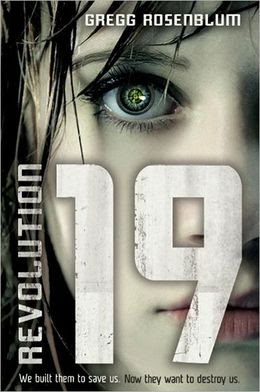 Twenty years ago, the robots designed to fight our wars abandoned the battlefields. Then they turned their weapons on us.
Nick, Kevin, and Cass have been spent their whole lives in a community in the wilderness, hiding out from the robots that have enslaved mankind. But when the bots discover their location, they barely make it out alive – only to discover that their home has been destroyed and everyone killed or captured. Now the siblings must risk everything to save the only people they have left in the world.
From the minds of award-winning writer-directors Howard Gordon (Homeland) and James Wong (Final Destination), and talented debut novelist Gregg Rosenblum, Revolution 19 is a blockbuster epic about a world where robots control humans, and humans battle for freedom.

First Sentence: Somewhere nearby, a dog barked and whined.

I received an ARC of Revolution 19 through ARCycling. Thank you ARCycling! (:

I heard so many bad things about Revolution 19 before I even read it, so I put the book into my to-avoid pile even though the cover of the book is completely gorgeous. However, I watched the book trailer and was sucked right in, so I decided to give the book a try. I knew what I was getting myself into after seeing all the bad reviews, but still, I’m disappointed with Revolution 19.

First a warning: the book itself and the book trailer are two very different things. The book trailer made it sound like Revolution 19 is taking place during the 19th attempt at a revolution from under the bots’ control. However, in the actual book, Revolution 19 stood for Nick, Kevin, and Cass’s Freepost, or small settlement out in the wilds.

My first complaint about Revolution 19 is the writing and the way it was written. First of all, there was absolutely no world-building. It was just said that the bots stopped fighting at 2:15 PM Greenwich time, then started killing their human commanders. That was it. Now starts all the questions I have. What wars did we fight? Stopped fighting what? What happened to the rest of the world? Where are my answers?

The robots are also never described in full detail. “He studied the Peteys. They had to be eight feet tall and five feet wide. Their dull gray metal…they smelled…of oil. Their faces were the same dull metal as the rest of their bodies, flat and featureless except for two rectangular openings where eyes would be…and inside the eye slits he could just make out black lenses, flickering back and forth, up and down.” (page 127) Okay, that’s great. Now, what’s the design of their bodies? Do they have like cannons installed in their bodies to burn the people or does it come out of their arms or eyes? Are their arms just dull gray metal poles or installed with machine guns? And why are there different types of robots like “the large warbird; the smaller bird…the boxlike rolling soldier…the darting, floating scouts in the woods”? (page 43) Were each type of bot made for a certain purpose when their creators made them? Again with the lack of world-building.

And oh my goodness, the stupidity of the characters. Let’s start with Kevin. He’s thirteen, almost fourteen he says, and his actions just makes me shake my head so hard at him. First, he’s basically the reason why his Freepost was killed and captured. Next, he gives away an important weapon he gained that will help his and his siblings’ survival. Then he blames the wrong person for things that aren’t her fault. Not to mention, Kevin steals something from a man that just saved his life along with his siblings. Are you serious Kevin?

And seventeen-year-old Nick. Oh man. Since he’s the oldest, he’s supposed to be the bravest and most fearless, but they forgot to add, one of the most stupidest too. So a robot is heading toward his siblings and his friend and Nick decides to be so noble and leads the robot away. Oh wait. Did I mention that when he stepped behind the robot, the robot was heading the other direction away from his sibling and friend? That Nick basically gave himself away for no reason whatsoever? And the others dare to call him a brave, noble idiot? Um, excuse me, but he’s more of a brave, DUMB, STUPID idiot.

Every single character in Revolution 19 is given a role and sticks to it without any character growth. Nick is the fearless brave leader who takes care of his siblings, Cass is the sporty girl, and Kevin is the technology freak. Whenever his siblings are in danger, Nick will handle it. Whenever anything sporty pops up, no problem, Cass will ace it. Whenever anything dealing with technology pops up, Kevin will sure be there to ask questions.

Overall, Revolution 19 would be the perfect script for a film, but not an actual book. Films don’t care about the small details books does; you can see them and they just happen. However, books don’t work that way. Add stupidity and a huge annoyance factor to the characters and you have a not-so-good book. So you guys, avoid reading Revolution 19 at all costs. Don’t be fooled by the book trailer and give it a chance like I did. You’ll save some brain cells and keep your blood pressure down.