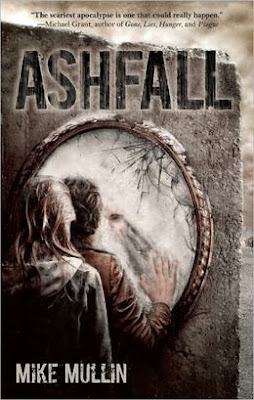 Many visitors to Yellowstone National Park don’t realize that the boiling hot springs and spraying geysers are caused by an underlying supervolcano, so large that the caldera can only be seen by plane or satellite. And by some scientific measurements, it could be overdue for an eruption.
For Alex, being left alone for the weekend means having the freedom to play computer games and hang out with his friends without hassle from his mother. Then the supervolcano erupts, plunging his hometown into a nightmare of darkness, ash, and violence. Alex begins a harrowing trek, searching for his family and finding help in Darla, his travel partner. Together they must find the strength and skills to survive and outlast an epic disaster.

First Sentence: I was home alone on that Friday evening.

Ashfall was one of those books that I’ve been meaning to read for the longest time, but couldn’t find time to. Now that I finally made the time to read Ashfall, all I can say is “meh.” Sure, Ashfall was climatic and suspenseful, but it reminded me a lot of Life As We Knew It by Susan Beth Pfeffer, except with a different realistic situation and not as good writing.

One problem I had with Ashfall was Alex’s character in general. We don’t really see Alex as a real person until he meets Darla. There were also some parts in the book where Alex, who is sixteen, acts too mature for his age. I’m eighteen, and if I was in Alex’s position, I won’t be wondering how the world would change due to the ashfall, I’ll be thinking will I be alive? How will I survive? (Please keep in mind that this was in the beginning of the ashfall, before Alex started out on his journey looking for his parents and became old and wise and philosophical.) Also, I doubt most sixteen year old boys would know what materials his house is made out of. Hell, I don’t know what materials the house I am living in for eighteen years is made out of. If you asked me, I’ll just give you a dumb look.

However, I like Darla. No. Wait. I love that girl. Ashfall brightened up a lot when we met her. I love her attitude and how she constantly was thinking of ways for Alex and her to survive. She’s the logical one of them two and I like her for it. Darla isn’t afraid to tell it as it is and think of brilliant plans to save both their lives. If I had my say, I think she can do better than Alex.

The writing style in Ashfall seemed a bit dull to me. Maybe it’s because I’ve read so many dystopia novels lately that basically had similar results happening like Ashfall did: people eating other people to survive, raids in stores, camps, etc., that nothing really surprised me. Ashfall also didn’t really engage me completely; it will capture my attention for five pages, bore me again for several pages, then recapture my attention again.

I have to give Mike Mullin credit though, for making me wonder what will happen if the Yellowstone volcano (if that’s is the volcano’s name name) really does explode, what will happen to all the people there that are effected? It’s kind of like the effect Susan Beth Pfeffer’s book had on me when I finished reading it in eighth grade. Ashfall and Life As We Knew It makes me want to stock up on canned foods and batteries now while I still have the chance to. After reading Mike Mullin’s Ashfall, I may as well add skis and a staff to the list.

One thing Mike Mullin’s Ashfall did better than Susan Beth Pfeffer’s Life As We Knew It is the fact that peeing was mentioned many times in the book. Don’t make that disgusted face at me! Everyone needs to pee, it’s life. However, in Life As We Knew It, peeing was hardly ever mentioned unlike Mike Mullin’s Ashfall, who actually realizes that people need to pee to survive. It wasn’t awkward reading those scenes, it was realistic.

Don’t look at my rating and decide not give Ashfall the time of your day. Read it; try it out. It may suit you. The only reason it got such a low-ish rating from me is because I was expecting most events in Ashfall to happen and they did indeed happen. Only a very few things in Ashfall caught me by surprise. You may not be expecting the same, so really, give Ashfall a shot.