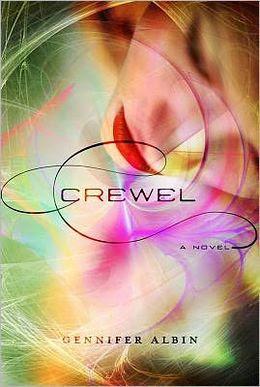 What a tangled world she weaves…
For generations, Splinters have been called by Arra’s Manipulation Services to work the looms and determine what people eat, where they live, how many children they have, and even when they die. Gifted with the rare ability to weave time with matter, Adelice is exactly what the Guild is looking for, and in Arras, being chosen as a Spinster is everything a girl could want. It means privilege, eternal beauty, and being something other than a secretary. It also means the power to embroider the very fabric of life. But once you become a Spinster, there’s no turning back. Now caught in a web of lies and intrigue, Adelice must decide whom to trust: her kind mentor, Enora; the handsome and mysterious valet Jost; or the charismatic Guild ambassador Cormac Patton. They each have secrets, but Adelice is about to unravel the deadliest one of all, a sinister truth that could destroy reality as she knows it.
In a powerful and original debut about a world where the Guild decides everything, one extraordinary girl dares to defy the power of men and the boundaries of love.

First Sentence: They came in the night.

Crewel was one of the books that had a lot of mixed reviews that came along with it. Some liked people it a lot while others loathed it with a passion. I was planning on staying away from Crewel, until the beautiful book trailer caught my attention. I also loved the slogan that goes along with Crewel: What a tangled world she weaves. With that in mind, I decided to give Crewel a try.

The beginning of Crewel was fantastic. I was automatically sucked into the world of Arras and how it works: the dangers of it, the regulations and rules, and how the society functions. Every time I learned something new, other new questions automatically came up, making me want to read more. In my opinion, the world of Arras is common in the typical dystopian novel (controlling government, hidden secrets, etc.), but the way the book was executed was absolutely flawless that I didn’t mind. Simply, Crewel‘s world-building reached beyond my expectations.

However, when I got to the middle part of Crewel, things started slowing down dramatically. Adelice is basically going through the same things: hiding her true ability, fighting with Maela, and finding out what it really means to be a Spinster. Basically, it’s those three events continuing on in repeat.

As for the love triangle, I was dumbfound on why it even existed. Ever since the beginning, it was quite obvious (to me) who Adelice would end up with. When the other guy in the love triangle was fighting for Adelice’s attention, all I could think of was really? Since when was he even in the running? It made me feel that Gennifer Albin inserted a love triangle in Crewel to stir up a little drama, but that just didn’t work out.

Some things in Crewel also just didn’t make sense. It was said that the people of Arras are blissfully unaware of how the Guild really runs things, so they should be content and happy, but why are they scared and angry with the officials working for the Guild then? Will we ever meet the mysterious Guild? Also, why must Spinsters put on cosmetics and why are their looks so important to them? They should be satisfied that they have power other people don’t have and riches to come along with it, but why place such importance on their looks? Hopefully it’ll all be explained in the sequel.

Just a warning to readers: Crewel is a hard book to follow along with. When you read, you really have to pay attention or things will go flying over your head and you’ll be left with what did I just read? If you’re looking for a simple book, then Crewel is not the book for you.