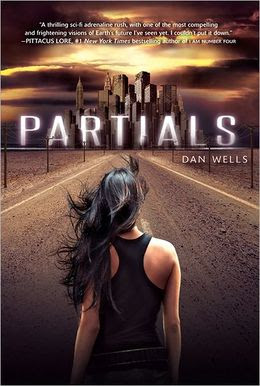 The human race is all but extinct after a war with Partials – engineered organic beings identical to humans – has decimated the population. Reduced to only tens of thousands by RM, a weaponized virus to which only a fraction of humanity is immune, the survivors in North America have huddled together on Long Island while the Partials have mysteriously retreated. The threat of the Partials is still imminent, but, worse, no baby has been born immune to RM in more than a decade. Our time is running out.
Kira, a sixteen-year-old medic-in-training, is on the front lines of this battle, seeing RM ravage the community while mandatory pregnancy laws have pushed what’s left of humanity to the brink of civil war, and she’s not content to stand by and watch. But as she makes a desperate decision to save the last of her race, she will find that the survival of humans and Partials alike rests in her attempts to uncover the connections between them – connections that humanity has forgotten, or perhaps never even knew were there.
Dan Wells, acclaimed author of I Am Not a Serial Killer, takes readers on a pulsepounding journey into a world where the very concept of what it means to be human is in question – one where our humanity is both our greatest liability and our only hope for survival.

I honestly didn’t know what to expect when I first started reading Partials. I just knew that it was about killer robots that look like humans and had a fantastic dystopian cover. (Hey, can you blame me for judging a book by its cover?) When I read the first couple of pages, I was started to regret it since it didn’t look like my type of book, until I got deeper on into the book. Want a group of rebels? You got one. Want conspiracies? You get tons. Want death? Oh my goodness, you get so many deaths. Want action? Partials got it all. (I got a feeling I’m starting to sound like an advertisement for Partials.)

Partials is told from Kira’s point of view, and man, does she want to save everyone. When someone was obviously dead, Kira just has to insist that she can still save them. It soon gets very annoying when she does that more than three times throughout the book. Kira, it’s war time; there’s tension everywhere, you just can’t save everyone. Like Marcus said, Kira gets easily attached to anybody new she meets.

There isn’t much romance in Partials. The book starts off with Kira and Marcus already being a lifelong dating couple. That leads to a problem – Kira and Marcus are supposingly deeply in love with each other, but since we readers never witnessed how they fell for each other and what they’ve been through together, we are just forced to accept it along with their lovey-dovey words and actions (not that there were much, thank goodness).

That leads to my second problem with Partials: I didn’t really connect with any of the characters, except a character that Dan Wells killed off later. I just followed through everyone’s actions, not really understanding why they do the things they do. However, I did grow to care about some of the characters.

I love how Dan Wells isn’t afraid to kill people off – and with a good reason to kill them off too. Partials is realistic; I don’t know how many different young adult books I’ve read that has characters that were supposed to die (to make the plot better and move on), but in the end, didn’t die. It’s like authors are afraid to kill off their closest characters, but no, Dan Wells wasn’t afraid to. In fact, I’m still in shock over what happened at the end.

I’m also amazed at the amount of research Dan Wells did. You can automatically tell that he did so much research for Partials when you get to the parts in the book where Kira researches the virus. There were lots of complicated medical stuff explained in so much depth that I feel that I learned tons of medical stuff about viruses just by reading Partials.

So what are you waiting for? Go and give Partials a try! It may be a little slow at first, but believe me, it was worth reading.