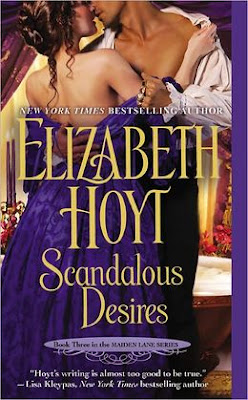 Can a pirate learn
River pirate “Charming” Mickey O’ Connor has lifted himself from the depths of the slums to be the king of St. Giles. Anything he wants he gets – with one exception. Silence Hollingbrook has been haunting his dreams ever since she spent a single night in his bed.
that the only true treasure…
Once Silence was willing to sacrifice anything to save the man she loved. Now a widow, she’s finally found peace when Charming Mickey comes storming back into her life with an offer she can’t refuse. But this time she won’t be the only one paying the price for his sins.
lies in a woman’s heart?
When his past comes back to torment him, Mickey must keep Silence safe from a merciless enemy, while wrestling with the delicious hold this widow has on his heart. And in the face of mounting danger, both will have to surrender to something even more terrifying…true love.

Warning: This review contains spoilers of Wicked Intentions & Notorious Pleasures, books one and two of the Maiden Lane series.

I have looked forward to reading Scandalous Desires, Silence’s story, ever since I read about her and her situation in Wicked Intentions. How will she manage after all she’s been through? First, her husband William and her family doesn’t believe her after that “scandal”, her reputation is scarred for life, and now she finds out that Mary Darling, the baby she found outside her doorstep and has been taking care of ever since, is Charming Mickey O’Connor’s daughter, the same pirate who changed her life forever.

I’m going to be blunt: I love Mickey O’Connor. Seriously, where’s my Mickey O’Connor? I demand one! Sure he’s violent, but he grew up in the slums with a merciless father and a mother who could care less for him. I still admire the lesson he taught Silence – even though it broke a part of her until she reunited with him and grew to love him. (For those of you who didn’t read the first book, in Wicked Intentions, Mickey stole William’s cargo from a ship William was borrowing. William was to be hanged unless he can somehow retrieve the cargo back from Mickey. However, Mickey O’Connor is the pirate of St. Giles and no one dares to defy him. Silence, who loves her husband dearly, decides to go to Mickey’s lair and pleads him to return back her husband’s cargo. He agreed – on two conditions: Silence will spend the night with him in his bed [while he sleeps in his chair in the same room] and in the morning, she must tousle her hair and undo the front of her dress until her breasts were nearly revealed and walk all the way back to her house like that. Why? Well Silence said that William loves her and believes in her while Mickey, on the other hand, mockingly says, “If he loves ye, he’ll believe ye,” and sends her out. And guess what the result is? Yep, Silence’s husband didn’t believe her and treated her so coldly until he died, lost at sea in Notorious Pleasures.)

Is it wrong that I’ve been rooting for Silence to get together with Mickey all along since the beginning? Probably. Some people might find what Mickey did cruel and evil, but I don’t. It’s as simple as he says, if her husband truly did love her, he’ll believe her. I might use this trick on my future serious boyfriend before I marry him to see if he indeed does truly love me.

Well, enough about Mickey O’Connor (sort of). I just love the way Elizabeth Hoyt wrote the scenes between Mickey and Silence. Unlike other women Mickey handles, Silence has her own mind and her own opinions. She doesn’t follow his orders and he just can’t pay her off to do his biding. Their sexual tension was amazing and had me grinning at almost every page.

I love the scenes where Mary Darling appears. She had me laughing at times (“Bad!” is Mickey’s name according to her) and I can easily see how she won the hearts of Mickey’s men. I can’t wait to see how Mary will turn up to be like when she grows up.

And that ending. I was so not expecting that. It just made me want to grab Thief of Shadows off my shelf and devour it.

Scandalous Desires is so far the best book in the Maiden Lane series by a mile. Hopefully, it gets better on from there.