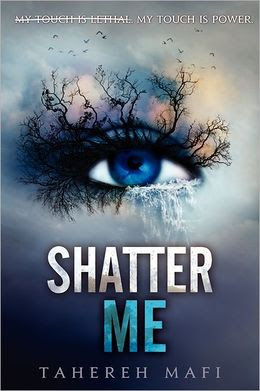 I have a curse.
I have a gift.
I’m a monster.
I’m more than human.
My touch is lethal.
My touch is power.
I am their weapon.
I will fight back.
No one knows why Juliette’s touch is fatal, but The Reestablishment has plans for her. Plans to use her as a weapon. But Juliette has plans of her own. After a lifetime without freedom, she’s finally discovering a strength to fight back for the very first time – and to find a future with the one boy she thought she’d lost forever.
In this electrifying debut, Tahereh Mafi presents a riveting dystopian world, a thrilling superhero story, and an unforgettable heroine.

First Sentence: I’ve been locked up for 264 days.

Let me start this review with talking about the old cover and the new revised cover. At first, I liked the old cover a lot better, wondering, why would they change the old cover to something like this? What did a book with the title Shatter Me have in common with an eye? Now, after having the new paperback cover in my hands, I can see why. The little details on the eye is simply beautiful. I love the way the designer used branches of trees without leaves as the eyelashes of the eye and the watery tears as waterfalls. The blue iris (I don’t know if that’s what you call it) is also breathtaking and completely striking.

Tahereh Mafi’s writing is unique. I have never seen anything like it before. Her writing is purposely repetitive and contains tons of descriptions that doesn’t truly make sense when you read each sentence individually. This one sentence describes what I mean perfectly: “The sun is high high high, lounging against a backdrop propping up its rays and redirecting its warmth in our general direction.” (page 101) Tahereh Mafi is basically saying that the sun is rising in that long sentence. However, the way she is describing the scene is beautiful and full of feeling, although if you read it carefully, it doesn’t truly make sense.

In fact, I’m leaning towards liking Warner better. Warner might be an evil freak of nature, but at least he has more depth than the cardboard Adam. However, when Juliette starts describing how attractive and strong Warner is, I was just plain disgusted. This is the guy who made you kill, who abused you and forced himself on you, and you think he’s attractive?! Please. Open up your eyes Juliette.

The last seven or so chapters of Shatter Me is just astonishing. I truly never expected that since it doesn’t match the rest of the book. There are so many ways Tahereh Mafi can go with that idea and I’ll definitely read Unravel Me to see which direction she’ll take with her series. Thank goodness it comes out in less than two weeks from today!

« Waiting On Wednesday [15]
Let’s Speculate: What Are Your Pet Peeves in Books? »