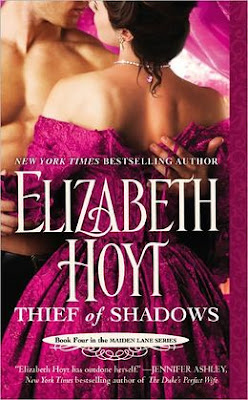 A MASKED MAN…
Winter Makepeace lives a double life. By day he’s the stoic headmaster of a home for foundling children. But the night brings out a darker side of Winter. As the moon rises, so does the Ghost of St. Giles – protector, judge, fugitive. When the Ghost, beaten and wounded, is rescued by a beautiful aristocrat, Winter has no idea that his two worlds are about to collide.
A DANGEROUS WOMAN…
Lady Isabel Beckinhall enjoys nothing more than a challenge. Yet when she’s asked to tutor the Home’s dour manager in the ways of society – flirtation, double-entendres, and scandalous liaisons – Isabel can’t help wondering why his eyes seem so familiar – and his lips so tempting.
A PASSION NEITHER COULD DENY
During the day Isabel and Winter engage in a battle of wills. At night their passions are revealed…But when little girls start disappearing from St. Giles, Winter must avenge them. For that he might have to sacrifice everything – the Home, Isabel…and his life.

First Sentence: The body in the road was was the absolute cap to the day.

When we readers first meet Winter in Wicked Intentions, I can sum him up with two words: reliable and hard-working. However, when I first read Thief of Shadows, I was shocked. Who knew that the calm, hard-working, reliable Winter has so many depths to him unknown by his family and friends? Who knew he was the Ghost of St. Giles? Who knew Winter would easily give up the thing that makes Winter Winter to benefit the one he loves?

Isabel, on the other hand, I never really connected with. I felt that Isabel is a bit of a two-dimensional character: she keeps her true self hidden (her true self being that she has habits autocratic society will not approve of). I didn’t really like Isabel, but I didn’t really hate her either. She was just…there, and really, there’s nothing much to say about her.

The one character that made me want to go into the actual book and smack her until she grows an actual brain is Lady Penelope. I can’t stand that woman. Ever since she first appeared in Scandalous Desires, I have been struggling to like her, to no avail. Sure, she’s “beautiful” (although I always picture her as, let’s say, huge because of her personality huge fondness for being overly dramatic), she as dumb as a nut and as dramatic as a squirrel. Every time she talks, I just want to shake her and say, “Lady, can you buy a brain already?” I’m going to say this: Lady Penelope better not have her own book; she doesn’t deserve it. If she does and I read it, I might end up flinging the book against the wall several times while reading it.

Unlike Elizabeth Hoyt’s Legend of the Four Soldiers series, each book in her Maiden Lane series focuses on one particular villain, with the exception of Notorious Pleasures and Scandalous Desires, where the villain is involved with both of the heroes in the books. I like this style better since every book contains a new mystery/adventure and there won’t be any recaps needed if you started reading from the second or third book in the series.

I’m disappointed that we don’t get any Silence and Mickey O’Connor in Thief of Shadows. I was looking forward to reading how their life is now after Mickey quit pirating. Hopefully they’ll appear in the next book so I can enjoy them.