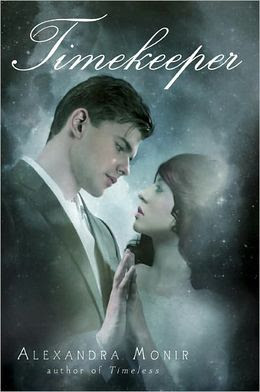 First Sentence: Walter and Dorothy Windsor lingered over their afternoon tea, peacefully unaware that the one they feared had stolen through the gates to their home.

After reading Timekeeper, the only statement constantly running through my mind is: Alexandra Monir should have stopped with the first book. That, at least, wouldn’t have made me wonder why Timekeeper has a similar cover, font style, font size, and names as Timeless, but is so far apart from Timeless in so many ways that it could have been written by a different author altogether. While Timeless kept me breathless and entranced with the story, Timekeeper kept me bored. To think I was angry that the publishers delayed Timekeeper‘s release date by three weeks (December 2012 to January 2013). All that anger wasted for nothing.

What I got instead was utter boredom. Unlike Timeless, absolutely nothing in Timekeeper interested me, except for that one paragraph where it described the love between Michele’s parents (Marion and Irving). That paragraph was utterly breathtaking and sweet.

I didn’t connect with any of the characters in Timekeeper. I was just following through Michele’s actions, but never really felt what she was going through. I also didn’t feel the same chemistry I felt between Michele and Phillip in Timeless. Their relationship just felt forced, sloppy, and slow.

While I was reading Timekeeper, I was also wondering if I somehow got my hands on an ARC instead and mistaken it for the real, finished, final edition. I easily spotted two grammatical errors that could have been easily spotted and fixed and who knows how many other errors there are?

Overall, fans of Timeless, don’t read Timekeeper. It will just ruin your whole image of the series, trust me. For people who didn’t read the Timeless series at all, read Timeless. It’s totally worth your time, but I personally recommend you to skip the sequel. If the Timeless series is made into a trilogy, I doubt I’ll be reading the last and final book. Thank goodness I didn’t buy Timekeeper.