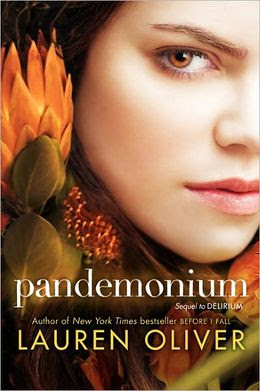 First Sentence: Alex and I are lying together on a blanket in the backyard of 37 Brooks.

I’ve been putting off reading Pandemonium a long time. Why? There are two main reasons. First, I struggled to get through the middle half of Delirium while thinking about giving up on it at least more than three times. I didn’t give up on finishing Delirium though, and got through it, although it cost me five full days to finish reading it. (On average, a book takes me a day and a half to read.) Second, I already know a majority of what happens in Pandemonium since my sister read it right after I read Delirium and accidentally (or maybe she did it on purpose) spoil important parts of Pandemonium for me. However, one of the books I resolve to read in 2013 was Pandemonium, so I finally picked up the copy I borrowed from the library for three months so far, sat down, and started reading it.

I don’t get why Lauren Oliver decided to write Pandemonium using flashbacks and what’s going on in the present (“then” and “now”). Usually, I love reading those kinds of books, but for Pandemonium, there wasn’t any point to it. At the end of some chapters, there were cliffhangers dealing with Lena’s life, but there wasn’t any point to it because of course Lena survives since this is the second book in the Delirium trilogy. If Lena dies, then there wouldn’t be three books in the Delirium trilogy at all, only two.

One thing I have a problem with in Delirium and Pandemonium‘s world-building is if Lena’s mother Annabel was so dangerous because she remembers love and the cure won’t work on her, why not just kill her instead of locking her up in solitary confinement and wasting money that the government so desperately need? The government easily kills Invalids in the wild who rather live with love than without love, which is basically the same thing with the people locked up in solitary confinements, so why not just get rid of them once and for all? Why leave them locked up with a huge risk of escaping?

(Skip this paragraph if you haven’t read Pandemonium yet.) Another thing that doesn’t make sense is after Lena escapes with the help of her mother from the Savage homestead, no one was looking for her. You would think everyone would be looking for her, especially since she was caught in an intimate position next to Julian Fineman, the main human icon of the DFA, but no, everyone happens to forget about her, even the media. What?

As for the dreaded love triangle, I’m on Team Nothing. I liked Alex when we first meet him in Delirium (how can you not with the stunt he pulled?), but didn’t get a strong feeling that Lena and his relationship was real. With Julian, I understand how Lena and him fell for each other, but I don’t really care about him. I’m curious to see how it ends though.

I will definitely read the sequel, Requiem, to see who Lena ends up choosing in this dreaded love triangle. I’m also interested in reading Hana, who is now cured, point of view. I want to see how the cured thinks, feels, and behaves. Luckily March 2013 isn’t that far away.