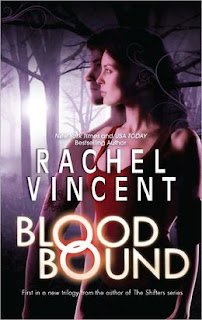 By blood, by word, by magic.
Most can’t touch the power. But Liv Warren is special – a paranormal tracker who follows the scent of blood.
Liv makes her own rules, and the most important one is trust no one.
But when a friend’s daughter goes missing, Liv has no choice but to find the girl. Liv can’t rest until the child is home safe. But that means trusting Cam Caballero, the former lover forbidden to her.
Bound by oath and lost in desire for a man she cannot have, Liv is racing to save the child from a dark criminal underworld where secrets, lies, trauma and danger lurk around every corner…every touch…every kiss.
And more blood will be spilled before it’s over…

First Sentence: Only two-thirty in the morning, and I already had blood on my hands.

I’ve never read a book Rachel Vincent wrote before, and boy, am I sold. I wasn’t sure if I’ll enjoy her Soul Screamers series, so I decided to give one of her adult book series a try before I start reading her Soul Screamers series, but I never actually expected to enjoy Rachel Vincent’s adult book. Blood Bound was an amazing read overall, although it had a couple of flaws itself.

Blood Bound has excellent worldbuilding – you know all about the different type of paranormals that exist in the world and what they can do, how the city Liv is living in is like, what role the government plays in all this, etc. The only downfall to the worldbuilding is that in order for us to know about the world where Blood Bound takes place, everything is info-dumped. The first chapter alone was filled with paragraph after paragraph describing what Liv was doing and how the entire city worked, who was in charge, etc. I just wished Rachel Vincent found another way to introduce us into her creative beautiful word without resorting to info-dumping.

I also enjoyed watching the whole mystery part of the book in Blood Bound being solved. I would never, in my wildest dreams, have guessed that happened, although once a piece of the truth was revealed, I could easily guess the rest of it and it turns out I was right. (Yay for genius plot guessing skills!) I’m happy to say after that, Liv and the others didn’t take too long to catch up to what I already figured out. (One of my biggest pet peeve in reading books is me figuring out everything long before the characters in the book figures it out.)

I hated Cam, Liv’s love interest. In fact, I may need a stronger word than hate. Loathed? Was disgusted with? Detest? Cam always bought Liv down. First of all, he managed to do the one thing a boyfriend is never to do, he slept with his girlfriend’s best friend. That’s right guys, you read that sentence right, Cam freaking slept with Liv’s best friend. (I’m tearing out my hair while writing this.) And when he had the chance to come clean about it, he didn’t. Cam kept it a secret until someone else revealed the truth to Liv. (I still can’t believe that Liv forgave him so quickly in less than one hour. What! I would make him suffer for centuries.) Also, in the end of Blood Bound, Cam basically made Liv do two things she had never wanted to do all along. I wanted to tear my hair out, jump into the book, and literally let Cam have it. Ugh. Poor Liv. (And yes, the book did end with a cliffhanger.)

I was going to read the next book in the Unbound series, Shadow Bound, asap…but found out it wouldn’t be told from Liv or Cam’s point of view like how Blood Bound was. In fact, it would be told from someone who isn’t close to them, so I basically dug myself a hole and cried. But no, seriously, will we ever get to find out what Liv did? Rachel Vincent, why do you have to torture me so?

Anyway, enough of my complaining, if you haven’t given Blood Bound a try yet, read it. I rarely enjoyed reading adult books this much (besides the Charley Davidson series), so seriously, go grab a copy of Blood Bound and devour it. Hopefully I’ll be able to make time for Rachel Vincent’s Soul Screamers series next month.

« Waiting On Wednesday [20]
Let’s Speculate: What Do You Want To See In A Book Ending? »