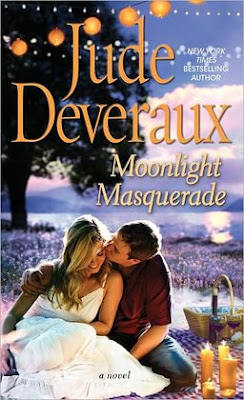 After being abruptly jilted, Sophie Kincaid flees to the place her friend Kim Aldredge calls heaven on earth. But Sophie’s first taste of Edilean is far from heavenly: after her car breaks down on a country road, she is nearly run over by a speeding sports car. A small act of revenge brings some satisfaction, and word quickly spreads that a gorgeous newcomer gave the driver, the notoriously bitter Dr. Reede Aldredge, a dressing down! But it isn’t the first time the fiery artist has gone too far for payback; a secret possession she carries with her could shatter her ex-boyfriend’s future. Reede Aldredge has secrets, too, including a desire to get closer to the beauty who is turning his dark world upside down. Under the night skies, their masquerade is magic—but will it turn to dust by the light of day?

The first problem I had with Moonlight Masquerade was the random point of views the book was told in. I would be reading a chapter told from Sophie’s point of view, when suddenly, a paragraph or two pops up telling the story from Reede’s point of view, then goes back to Sophie. This happened more than three times and when it happened, I was super confused. This problem prevented Moonlight Masquerade from having a good flow, especially when I had to stop, blink twice, and think what is going on?

I also expected the plot of Moonlight Masquerade to be completely different than what it actually was, especially after reading the excerpt of the first chapter. I was expecting Sophie and Reede to meet up, discover each other’s true identity, then fights will ensure after what had happened, and then they’ll hopelessly fall in love. But no, I didn’t get that. Instead, I get something totally different and lame. (I can’t really tell you what or else it’ll be a major spoiler.) Moonlight Masquerade only managed to keep my attention for half of the book and after that, Moonlight Masquerade was about pointless things that managed to extend the book for about one-hundred and fifty more pages.

The “sex scenes”, if you can even call it that, was laughable. I think it was Jude Deveraux’s first attempt in writing a descriptive sex scene (since I read at least five of her other books, but none had tried to describe the sex in full detail), trying to be like all other historical romances out there, but she made it so awkward that I just had to skip those three paragraphs.

And the ending. Oh my goodness, that was lame. That is not how you end a book. The ending chapters just dragged on the situation while I was thinking get over it already and just solve that simple problem! On the last page of Moonlight Masquerade, I turned the page, expecting there to be more pages in the book, but found out instead that no, that was really the ending. Jude Deveraux decided to solve the problem on the last two pages and just ended the book like that. If Moonlight Masquerade is the last book in the Edilean series, then I think that Jude Deveraux ruined a perfectly decent series with that ending.