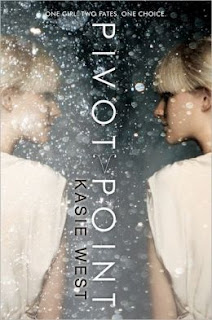 Knowing the outcome doesn’t always make a choice easier…
Addison Coleman’s life is one big “What if?” As a Searcher, whenever Addie is faced with a choice, she can look into the future and see both outcomes. It’s the ultimate insurance plan against disaster. Or so she thought. When Addie’s parents ambush her with the news of their divorce, she has to pick who she wants to live with – her father, who is leaving the paranormal compound to live among the “Norms,” or her mother, who is staying in the life Addie has always known. Addie loves her life just as it is, so her answer should be easy. One Search six weeks into the future proves it’s not.
In one potential future, Addie is adjusting to life outside the Compound as the new girl in a Norm high school where she meets Trevor, a cute, sensitive artist who understands her. In the other path, Addie is being pursued by the hottest guy in school – but she never wanted to be a quarterback’s girlfriend. When Addie’s father is asked to consult on a murder in the Compound, she’s unwittingly drawn into a dangerous game that threatens everything she holds dear. With love and loss in both lives, it all comes down to which reality she’s willing to live through…and who she can’t live without.

First Sentence: “Heads up,” a loud voice called from my right.

I’ve heard nothing but good things about Pivot Point – how it was an excellent debut, how engaging it is, and how it is the best book ever. Sadly, I didn’t feel the same way about Pivot Point. For me, Pivot Point was just an okay read. In fact, if it wasn’t for the last half of the book, Pivot Point would have obtained 3 stars from me instead of 3.5 stars.

Simply put, the beginning half of Pivot Point didn’t catch my attention. In fact, it bored me to death. Maybe it’s because I just read Scarlet, which was soo good and nothing could match up to that (except Anna and the French Kiss of course). Maybe it’s because I had some very high expectations of Pivot Point because everyone I knew was praising it so highly. I don’t know why, but I just didn’t enjoy the beginning.

The last half of Pivot Point was what saved Pivot Point. It was a little more engaging and threw so many plot twists at me that I had absolutely no idea what was going to happen next. And what did happen just shocked me to my core – I knew Addie had no choice, but still. The end left me looking forward to reading the next book just to see what would happen next.

One major problem for me while I was reading Pivot Point was the fact that I was not into reading the potential future where Addie stays with her mom, but only the potential future where she stays with her dad. The reason why I was looking forward to reading one potential future, but not the other, is because of a guy named Trevor – I’ve read so many reviews praising him and his awesomeness so much that I knew who would ultimately win out for Addie’s affections in the end, so why bother reading about the other guy competing for Addie when I can read about a truly awesome guy? In case you didn’t know, Pivot Point is told from two different alternative futures: one chapter would be focused on Addie staying with her mom, the next would be focused on her stay with her dad, then repeat. So basically, once I finished reading a Trevor chapter, I would rush through the next chapter, not really being engaged with it, until I reached a Trevor chapter once again.

Addie was also a little bit too weird for me. She meets this new guy, writes a weird note and leaves it on his desk, and starts stalking him (and eavesdrop on an important conversation he was engaging in) because she wanted him to be her new best friend. If he knew what she was doing, he’ll probably run far, far away. I’ll probably run far, far away from Addie when I found out what she was doing.