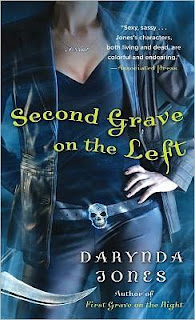 When Charley and Cookie, her best friend slash receptionist, have to track down a missing woman, the case is not quite as open and shut as they anticipate. Meanwhile, Reyes Alexander Farrow (Otherwise known as the Son of Satan. Yes. Literally.) has left his corporeal body because he’s being tortured by demons who want to lure Charley closer. But Reyes can’t let that happen. Because if the demons get Charley, they’ll have a portal to heaven. And if they have a portal to heaven…well, let’s just say it wouldn’t be pretty.

After reading First Grave on the Right, it is safe to say that I absolutely love Charley Davidson. She’s sassy, snarky, and plain hilarious all at once. The Charley Davidson series is the only book series that can get multiple chuckles out of me all at once, have people stare at me, and I just wouldn’t care. They can stare all day if they want, I’ll just keep on reading.

I’m starting to like Reyes a little more. He’s lost a lot of his threatening Charley behavior that I read in the first book and has a nice side to him that was revealed in Second Grave on the Left. I even enjoy Reyes’ jealousy and the rages that come along with it to my surprise. Usually, I detest guys who are jealous about every guy his love interest playfully flirts with.

One major problem that I noticed when I read First Grave on the Right and now Second Grave on the Left is that besides the humor, nothing really stands out in the Charley Davidson series. The mystery and fantasy part of the books aren’t that good and engaging to get a high rating; it’s only Charley Davidson’s humor that makes me read on. (You see how much I love you Charley?) That’s why instead of giving Second Grave on the Left a rating of 4 stars like I did with First Grave on the Right, I’m giving it a rating of 3.5 stars instead.

I have to admit though, the mystery part of Second Grave on the Left left me stomped all the way until the end where the big reveal happened. To believe that the culprit is someone so simple, but is, at the same time, someone who we would never guess in a million years, is astonishing. I totally picked the wrong person as the bad guy.

However, for the Reyes mystery part of the story, I totally figured it out when he gave Charley that first clue. It’s funny to see how I was right all along.

There was also a very emotional scene in Second Grave on the Left that made me cry on the train. I couldn’t believe that Charley forgave that easily, although after, there were some new relationships being built. (Yes, I’m being vague, but I don’t want to put any spoilers in my review!) I should read that scene again – and hopefully not cry through it this time.

Second Grave on the Left

« Waiting On Wednesday [19]
Let’s Speculate: What Events/Things Makes You Not Want to Try A Book? »