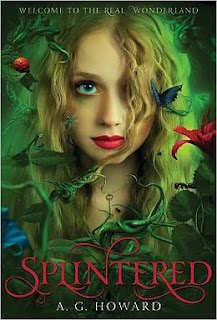 Alyssa Gardner hears the thoughts of plants and animals. She hides her delusions for now, but she knows her fate: she will end up like her mother, in an institution. Madness has run in her family ever since her great-great-great-grandmother Alice Liddell told Lewis Carroll her strange dreams, inspiring his classic Alice’s Adventures in Wonderland.
But perhaps she’s not mad. And perhaps Carroll’s stories aren’t as whimsical as they first seem.
To break the curse of insanity, Alyssa must go down the rabbit hole and right the wrongs of Wonderland, a place full of strange beings with dark agendas. Alyssa brings her real-world crush – the protective Jeb – with her, but once her journey begins, she’s torn between his solidity and the enchanting, dangerous magic of Morpheus, her guide to Wonderland.
But no one in Wonderland is who they seem to be – not even Alyssa herself…

First Sentence: I’ve been collecting bugs since I was ten; it’s the only way I can stop their whispers.

The cover of Splintered is absolutely gorgeous. It is probably why so many people wanted to read Splintered – including myself. Add the fact that Splintered is a Wonderland retelling and you’ve definitely got me hooked. The best thing of all about Splintered is that the story itself deserves the beautiful cover (unlike some other books with breathtaking covers).

I love how A.G. Howard started Splintered – I was absolutely gaping. Seriously. I’m dead afraid of bugs, but I never, ever, do what Alyssa does to them. It’s disgusting, gross, and somewhat disturbing, even though it fits into the story. I guess what I’m trying to say is that the first chapter of Splintered immediately got me invested into the story.

I also love A.G. Howard’s creative, refreshing twist on her version of Wonderland. I especially love how she changed the rabbit and the caterpillar and gave those two her own particular twist. It was uniquely done and her explanation for it was amazing. However, some parts of Splintered got too boring and tedious for me. Don’t get me wrong, I love A.G. Howard’s Wonderland, but there were also so many details and so many small events happening that didn’t have to be in the book that I sometimes just wanted to skim.

There were also small plot holes in Splintered and some things that just didn’t make sense. For example, did you know that elementary schools talk about periods (not this “.” but the girl’s time of the month period) in the third grade? I sure didn’t; in fact, it my mother who taught me everything I needed to know about my period. I’m pretty sure no elementary schools tell their students about periods (imagine the awkwardness and cootie incidents that can result from it) and when it was mentioned that Alyssa was taught about periods in her school when she was in third grade, it was downright…confusing. I’m pretty sure that teachers still don’t teach their students about periods even today.

Jeb annoyed me to no end in Splintered. He was so protective of Alyssa that it just wasn’t funny. Don’t get me wrong, protective boys can be cute, but to go into such lengths as Jeb does just hits me the wrong way. He doesn’t allow Alyssa to think for herself and make her own decisions; he’s always constantly questioning her and her decisions. What annoys me even more is that Alyssa hardly argues against his overprotectiveness (if that’s even a word). There were several times where I just wanted to plunge myself into the book, shake him, and say Alyssa can make her own decisions man!