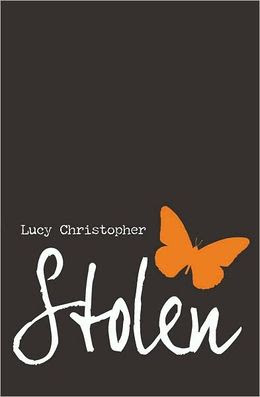 You saw me before I saw you.
A girl: Gemma, at the airport, on her way to a family vacation.
You had that look in your eyes.
A guy: Ty, rugged, tan, too old, oddly familiar, eyes blue as ice.
Like you wanted me.
She steps away. For just a second. He pays for her drink. And drugs it.
Wanted me for a long time.
He takes her, before she even knows what’s happening. To sand and heat. To emptiness and isolation. To nowhere. And expects her to love him.
Written as a letter from a victim to her captor, this is Gemma’s desperate story of survival. Ty has Stolen her body. Against every instinct screaming inside her, will he also steal Gemma’s heart?

First Sentence: You saw me before I saw you.

Stolen. I’ve heard so many good things about Stolen and the summary certainly captured my attention. I’m a huge fan of Criminal Minds and when I heard that Stolen was about a girl who was kidnapped, I just knew I had to get my hands on it, especially after watching countless episodes of people being kidnapped on Criminal Minds and learning that there was less than a 9% chance that the victim will survive after the first day of being kidnapped. What made me want to read Stolen right away, however, was the fact that Gemma’s captor actually expected her to love him. Who is that delusional? It turns out that there are many things that I wouldn’t know.

I admire Gemma, the person kidnapped, in a way. I don’t know how she stayed so strong and determined throughout the book. If I was the kidnapped one, I would retreat into myself and probably go slowly insane. In fact, I would probably kill myself right after I woke up to avoid being killed and tortured by my captor. (Hey, desperate times call for desperate measures.) Instead, Gemma holds on and uses her brain, making escape plans, although sometimes, she misses the most important clues Ty accidentally gave her.

I’m a bit ashamed to say this, but I also sympathized with Ty. Yes, there were times when I knew Ty was dangerous with uncontrollable, unexpected rages, but there were also times when he was just so sweet and patient and loving and just so sad. Ty had a very tough past himself, which is why he is the way he is. I know that his reasons for kidnapping Gemma can never truly be justified – but that doesn’t keep me from sympathizing with him and the beauty of his life.

After reading Stolen and reading everything that happened from Gemma’s point of view, I think I have obtained Stockholm syndrome along with her. Yes, we both know what Ty did was wrong, but in a way, I grew to love him too. He didn’t have to save her life countless times. He didn’t have to get caught. However, at the end when I realized what truly happened, I was still shocked because I was not expecting that. The ending of Stolen left a bittersweet smile on my face and made me wish that the book somehow never ended.

I wish that Stolen explored what happened after Ty’s prison sentence (even though it’s just not possible Stolen is a letter Gemma writes to Ty before the actual trial). I’m so full of theories on what would happen – Ty will probably “see” Gemma again and then something just has to happen.

After reading this review so far, you might wonder, but Kelly, you seem to really like Stolen. How come you gave it a measly 3.5 star rating then? Well, to answer your question, I wanted to give up on Stolen several times. Nothing truly caught my attention in Stolen after the kidnapping part and realizing that Ty wasn’t going to kill Gemma part – just scenes of Gemma and Ty slowly bonding in their own way. Some of the scenes was beautiful, yes, but other times, it was just draggy.

Overall, I would highly recommend Stolen. I’m a bit surprised that I liked reading Stolen myself; Stolen is the first book I actually like written by a Australian author. If you want to read a bittersweet story that will ultimately break your heart and tug on your heartstrings, then Stolen is definitely the book for you.