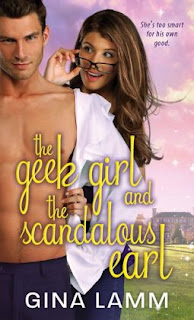 The stakes have never been higher.
An avid gamer, Jamie Marten loves to escape into online adventure. But when she falls through an antique mirror into a lavish bedchamber – 200 years in the past! – she realizes she may have escaped a little too far.
Micah Axelby, Earl of Dunnington, has just kicked one mistress out of his bed and isn’t looking to fill it with another – least of all this sassy, nearly naked woman who claims to be from the future. Yet something about her is undeniably enticing…
Jamie and Micah are worlds apart. He’s a peer of the realm. She can barely make rent. He’s horse-drawn. She’s Wi-Fi. But soon the pair will do anything to avoid a Game Over.

First Sentence: Her sword glittered as it swung in a wide arc, whistling as it cleaved the air.

When I heard that there was a book that focused on a girl who was a geek that had somehow time traveled back into the 1800s and met an earl, eventually falling in love with one another, I knew I had to snag that book and devour it asap. Luckily, the book was on NetGalley and after a day of waiting, I was accepted to read and review it. (Thank you NetGalley and Sourcebooks Casablanca!)

To clear things up before I start my review, Jamie is not really a geek girl, like I originally thought, but more like a video game geek girl. The title The Geek Girl and the Scandalous Earl confused me as I read the book because Jamie showed no signs of being a book or school geek girl, but more like a video game geek girl. However, I get that titles can’t be too long or too specific for books or they will be giving away too much details and events.

I’ve read a lot of historical romances before reading The Geek Girl and the Scandalous Earl, and I have to say that there were tons of modern expressions that Jamie used that should have gotten Mike confused. However, instead of being confused, Mike understood what Jaime meant perfectly when she used some modern terms. This is the main reason why I didn’t give The Geek Girl and the Scandalous Earl a high rating even though I enjoyed reading it. It just doesn’t seem right to me if an earl from the 1800s seem to know most modern day words.

Some of the events in The Geek Girl and the Scandalous Earl also didn’t really make sense. If you find an intruder in your home lying unconscious, would you a) help the intruder or b) call the cops asap? That’s right, you’ll call the cops immediately, or the people that took care of those incidents back then in the 1800s. However, Micah, who is an earl, just helps Jamie and kindly offers her refuge under his roof. All I was thinking while I was reading that scene was like wait, what? If Mike is nice enough to help a stranger that intruded into his home, wouldn’t he at least have one of his servants take care of her instead of doing it himself? I have never, in my life, read about such a nice and kind earl compared to all the other historical romances I’ve read before. It just seems too unrealistic – here an earl is, with so much power and money in the 1800s, and he himself helps people out instead of relaying on his servants. What?

The sex scenes in The Geek Girl and the Scandalous Earl could also be written better. It just didn’t match up to the sex scenes I’ve read from other historical romances.

« Book Review: Fourth Grave Beneath My Feet – Darynda Jones
Top Ten Books I HAD To Buy…But Are Still Sitting On My Shelf Unread »