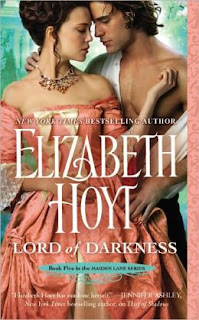 When Strangers In The Night
He lives in the shadows. As the mysterious masked avenger known as the Ghost of St. Giles, Godric St. John’s only goal is to protect the innocent of London. Until the night he confronts a fearless young lady pointing a pistol at his head – and realizes she is his wife.
Become Lovers…
Lady Margaret Reading has vowed to kill the Ghost of St. Giles – the man who murdered her one true love. Returning to London, and to the man she hasn’t seen since their wedding day, Margaret does not recognize the man behind the mask. Fierce, commanding, and dangerous, the notorious Ghost of St. Giles is everything she feared he would be – and so much more.
Desire Is The Ultimate Danger
When passion flares, these two intimate strangers can’t keep from revealing more of themselves than they had ever planned. But when Margaret learns the truth – that the Ghost is her husband – the game is up and the players must surrender…to the temptation that could destroy them both.

First Sentence: The night Godric St. John saw his wife for the first time since their marriage two years previously, she was aiming a pistol at his head.

I just love the cover of Lord of Darkness. Who would have ever thought that that particular shade of orange-pink and turquoise could ever go together, match, and end up quite stunning together? I was also quite curious about Lord of Darkness before I read it and was very eager to see how the story would go.

I first read about Godric St. John in the first book of the Maiden Lane series, Wicked Intentions. There, he was a sad, desperate husband because his wife Clara was sick in bed dying and there was nothing Godric could do nothing about it. Margaret Reading, in Thief of Shadows, the fourth book in the Maiden Lane series, was in love, until her lover was murdered and died. Lord of Darkness starts off after Godric and Margaret eventually married, but was living apart in different countries.

Lord of Darkness didn’t go in the direction I expected it to go. I thought that almost the entire book would be focused on Margaret chasing the Ghost of St. Giles – aka Godric – finding out his identity, and it would go on from there, but the book wasn’t like that at all. Instead, Lord of Darkness took care of that part pretty quickly and focused on Margaret and Godric’s growing relationship and how they learned to trust, and eventually love, each other.

I enjoyed reading about Margaret’s attempts to get what she wanted from Godric. It was so funny that I felt sorry for poor Godric, completely unaware of what his wife was up to. It was also cute how they slowly learned more about each other after being apart for two years and slowly, but surely, starting to fall in love. Their love story wasn’t rushed, messy, or completely mushy, instead, it was bittersweet and will tug on your heartstrings.

The only thing I wished Lord of Darkness had was Margaret’s age. (I don’t know if they will have Margaret’s age in the final copy, I’m only reading the ARC.) The book hinted several times that Margaret and Godric had a sort-of huge age difference, but have not revealed Margaret’s age, only Godric’s, leaving me very curious. I wonder if we will ever know. (Or maybe Margaret’s age was revealed in the previous books.)

I’m really looking forward to reading the next book in the Maiden Lane series, Duke of Midnight, which is about the Earl of Wakefield Maximus and Artemis. I wonder how that relationship will develop, especially after the earl’s stinging off-handed remark about Artemis, which made me really angry. November 2013 can’t come fast enough.

« 400 GFC Followers Giveaway – Win Any TWO YA Books Released In April (INT)
Let’s Speculate: Why Do You Read? »