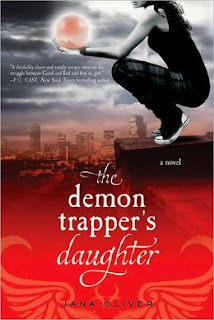 Riley Blackthorne just needs a chance to prove herself – and that’s exactly what the demons are counting on…
Seventeen-year-old Riley, the only daughter of legendary demon trapper Paul Blackthorne, has always dreamed of following in her father’s footsteps. The good news is, with human society seriously disrupted by economic upheaval and Lucifer increasing the number of demons in all major cities, Atlanta’s local Trappers’ Guild needs all the help they can get – even from a girl. When she’s not keeping up with her homework or trying to manage her growing crush on fellow apprentice Simon, Riley’s out saving distressed citizens from foul-mouthed little devils – Grade One Hellspawn only, of course, per the strict rules of the Guild. Life’s about as normal as can be for the average demon-trapping teen.
But then a Grade Five Geo-Fiend crashes Riley’s routine assignment at a library, jeopardizing her life and her chosen livelihood. And, as if that wasn’t bad enough, sudden tragedy strikes the Trappers Guild, spinning Riley down a more dangerous path than she ever could have imagined. As her whole world crashes down around her, who can Riley trust with her heart – and her life?

The Demon Trapper’s Daughter is also written from two different points-of-view: Riley and Beck. Usually I love reading about two people’s point-of-views to see what each person thinks and why they act the way they did, but in The Demon Trapper’s Daughter, I can’t stand to read Beck’s point-of-view. Beck’s point of view starts from chapter two, and as soon as I reached that part, my first thought was uh, am I reading this right? Beck uses words like “ya” and “yer” instead of you and your. I understand why Beck speaks and thinks that way because he grew up basically like an orphan and the times in The Demon Trapper’s Daughter don’t really allow for much education, but the way Beck thinks and talks just didn’t really give the book a good flow when I was reading chapters in Beck’s point-of-view.

It is very safe for me to say that if Jana Oliver’s writing wasn’t so detailed and if Beck’s point-of-view chapters wasn’t written using “ya” and “yer” all the time, I would enjoy reading The Demon Trapper’s Daughter a lot more.

On the other hand, I have to give Jana Oliver major credit for the great world-building in The Demon Trapper’s Daughter. I love how she made categorized demons according to their level or rank with their own different kinds of powers and different names. I also love how Jana Oliver isn’t afraid to show us that sometimes, a society can be so corrupt that there might not be any hope at all to save it. In fact, the world Jana Oliver created reminds me of a manga, Tsubasa: Reservoir Chronicles Volume Five, where Syaoran faced a similar world as the world in The Demon Trapper’s Daughter.

As a side note, I was very surprised to find out that the entire summary found in the back of the book was based completely on the first chapter. That left me intrigued to read on and find out what the rest of the book is about.

« Waiting On Wednesday [22]
Let’s Speculate: Why Should You NOT Use Captcha? »