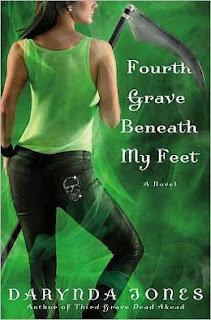 Welcome to the world of grim reaper extraordinaire Charley Davidson. Try as she might, there’s no avoiding her destiny.
Sometimes being the the grim reaper really is, well, grim. And since Charley’s last case went so awry, she has taken a couple of months off to wallow in the wonders of self-pity. But when a woman shows up on her doorstep convinced someone is trying to kill her, Charley has to force herself to rise above…or at least get dressed. It becomes clear something is amiss when everyone the woman knows swears she’s insane. But the more they refute the woman’s story, the more Charley believes it.
In the meantime, the sexy, sultry son of Satan, Reyes Farrow, is out of prison and out of Charley’s life, as per her wishes and several perfectly timed death threats. But his absence has put a serious crimp in her sex life. While there are other things to consider, like the fact that the city of Albuquerque has been taken hostage by an arsonist. Charley is having a difficult time staying away. Especially when it looks like Reyes may be involved.
Just when life was returning to normal, Charley is thrust back into the world of crime, punishment, and the devil in blue jeans in this hilarious fourth installment in the New York Times bestselling series.

First Sentence: I sat watching the Buy From Home Channel with my dead aunt Lillian and wondered what my life would’ve been like had I not just eaten an entire carton of Ben & Jerry’s Chocolate Therapy with a mocha latte chaser.

The first thing I have to say before I start my review of Fourth Grave Beneath My Feet is that we officially have some answers about Charley Davidson’s role in life and the war going on in heaven and hell! Yay! In case you’re confused because you have not read any of the previous books in the Charley Davidson series, the one thing I complained about in my last review of Third Grave Dead Ahead is that we never get any solid answers and Third Grave Dead Ahead was the third book in the Charley Davidson series. By the third book, we should get and deserve some solid answers right? It looks like Darynda Jones had somehow heard my complaint and satisfied me by giving me some solid answers in Fourth Grave Beneath My Feet.

As always, in my previous three reviews focused on the Charley Davidson series, I have to talk about Reyes. When we saw him towards the beginning of Fourth Grave Beneath My Feet, I hated him and absolutely loathed him. I wanted to slap him for Charley since she was too in like to do it herself. I can’t say anything else like why I hated Reyes because it’ll be a huge spoiler for those who haven’t read the book yet. However, as Fourth Grave Beneath My Feet progresses, Reyes slowly redeemed himself again, leading me to conclude that I have a pattern about how I feel about Reyes in each book: in one book I’ll hate Reyes, but in the sequel to that book I’ll like him again. Then the cycle repeats. Reyes toys around with my emotions too much.

Overall, Charley Davidson is still awesome, funny, and sassy, although we readers are still not clear what exactly she can do with all her powers. Right now, I’m hoping that Charley and Reyes can get their well-deserved happily ever after. And again, if you never read any of the books in the Charley Davidson series, then what exactly are you waiting for?

Fourth Grave Beneath My Feet