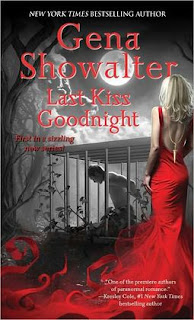 The breathtaking first novel in New York Times best selling author Gena Showalter’s new paranormal romance series, Otherworld Assassins, featuring a black ops agent who is captured and enslaved…and the beautiful deaf girl who holds the key to his salvation…
THE SWEETEST TEMPTATION…
Black ops agent Solomon Judah awakens caged and bound in a twisted zoo where otherworlders are the main attraction. Vika Lukas, the owner’s daughter, is tasked with Solo’s care and feeding. The monster inside him yearns to kill her on sight, even though she holds the key to his escape. But the human side of him realizes the beautiful deaf girl is more than she seems – she’s his.
THE ULTIMATE PRICE…
Vika endures the captives’ taunts and loathing, hoping to keep them alive even if she can’t free them. Only, Solo is different—he protects her. But as hostility turns to forbidden romance, his feelings for her will be used against him…and he’ll be put to a killer test.

First Sentence: Fourteen-year-old Viktorija Lukas raced between the circus tents, her throat and lungs burning as she gasped for breath.

After reading Alice in Zombieland and fairly enjoying it, I decided to give one of Gena Showalter’s adult books a try since she was so famous for her adult novels. I finally decided on reading Gena’s Last Kiss Goodnight, eager to see if her adult books were as good as people say, only to be badly disappointed by the outcome. There were so many problems in Last Kiss Goodnight that I’m not even sure where to start.

First, there was absolutely no worldbuilding. It was mentioned where Vika lived and that there was a place between worlds where people can hide, but that’s it. Now starts my million questions that were never answered: does that mean there were other worlds then? (I’ll think so since paranormal creatures are called otherworlders.) How many worlds are out there? When do we human beings discover those worlds? Why can’t human beings and otherworlders coexist? And my questions go on and on and on.

Also, in the beginning of each chapter, there was a quote from the Christian Bible. I don’t have any problems with that except for the fact that the Bible excerpts had absolutely nothing to do with the book itself. So why put a Bible verse in the beginning of each chapter? In the end, I just skipped them, knowing the Bible quotes had nothing to do with the story.

To make matters worse, at least a hundred to two hundred pages could have been easily cut out of the book. The pacing was pretty horrible too.

Oh, and did I mention the fact that Solo was stuck in the cage for 70% of the book? Last Kiss Goodnight consisted of 40% Vika constantly thinking I need to let them go! and 30% sexual tension. I was so tired of reading Last Kiss Goodnight by that point.

The funny thing is, I read other reviews of Last Kiss Goodnight and so many people were complaining about the huge non-existent lack of explicit sex scenes.

Overall, if you were interested in Last Kiss Goodnight like I was, skip this book. I particularly wasted a day reading it and all I got out of it was this: Solo is trapped in a cage. Vika wants to let him go but can’t. Okay, some sexual tension happens. Solo gets released, big fight happens, and Solo and Vika lives happily ever after. The end. Honestly, I’m afraid to try Gena Showalter’s other adult books now.