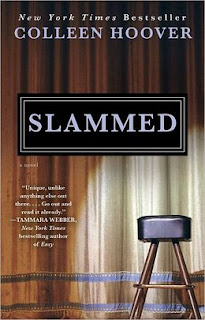 New York Times bestselling author Colleen Hoover writes a romantic debut about a family shattered by a sudden death that leads to two unlikely lovers forming an intricate bond. Following the unexpected death of her father, eighteen-year-old Layken is forced to be the rock for both her mother and her younger brother. Outwardly, she appears resilient and tenacious, but inwardly, she’s losing hope.
One young man brings change to all of his. After moving across the country, Layken meets her attractive twenty-one-year old neighbor who has an intriguing passion for slams. Within days of their introduction, Will and Layken form an intense connection, leaving Layken with a renewed sense of hope.
Not long after a heart-stopping first date, they are slammed to the core when a shocking revelation forces their new relationship to a sudden halt. Daily interactions become impossibly painful as they struggle to find a balance between the feelings that pull them together and the forces that tear them apart.

First Sentence: Kel and I load the last two boxes into the U-Haul.

I’ve heard so many never-ending good things about Colleen Hoover’s Slammed and what an awesome, terrific book it is. People were praising Slammed left and right, worshiping it, and recommending it to everyone. I’ll be honest, I hardly read self-published books, especially New Adult self-published books, so when I heard about Slammed and how good it was, I was not so eager to give it a chance, but decided to anyway. The result? I enjoyed it, but I’m not really impressed by it.

Before I started reading Slammed, I already knew that Slammed was focused on a student-teacher relationship, which was similar to Aria’s situation in the first couple of books in the Pretty Little Liars series that I read in high school. I could only hope that Slammed didn’t gross me out and make me want to throw the book against a wall. Thank goodness it didn’t come to that. In fact, I suprisingly enjoyed reading Slammed, even though it featured a student-teacher relationship due to Layken and Will’s unique circumstances.

What I mainly liked about Slammed is Kel and Caulder, Layken and Will’s younger siblings. Kel and Caulder literally brightened up the book for me and bought a lot of humor into it, especially in one of the scenes near the end of the book. It is safe to say that if Kel and Caulder didn’t exist, I would probably be liking Slammed a lot less.

“Ms. Cohen,” Principal Brill says. “They’re dressed as cancerous lungs!” She shakes her head in disbelief.
“I thought they were rotten kidney beans,” Eddie says.
We both laugh. (291)

The one and only thing that really annoyed me in Slammed is Layken, the main character and the person who is telling the story. She is just so annoying, narrow-minded, and just ugh! Her whole “carving the pumpkins” thing made me want to slap her and tell her to grow up already. I can’t explain this any further or this review will contain some major spoilers, but all I can say is that Layken doesn’t know how good she has it, avoiding her own problems, especially when there are other characters she meets in the book that have way less.

Overall, sure, I’ll recommend Slammed, but with a warning attached: if you won’t enjoy reading about student-teacher relationships, then Slammed is definitely not the book for you. Otherwise, why not give Slammed a chance?

« Stacking the Shelves [25]
Top Ten Books I Recommend The Most »