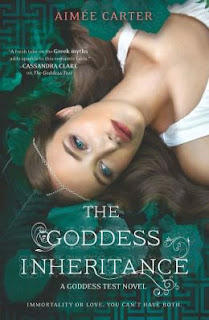 Love or life.
Henry or their child.
The end of her family or the end of the world.
Kate must choose.
During nine months of captivity, Kate Winters has survived a jealous goddess, a vengeful Titan and a pregnancy she never asked for. Now the Queen of the Gods wants her unborn child, and Kate can’t stop her – until Cronus offers a deal.
In exchange for her loyalty and devotion, the King of the Titans will spare humanity and let Kate keep her child. Yet even if Kate agrees, he’ll destroy Henry, her mother and the rest of the council. And if she refuses, Cronus will tear the world apart until every last god and mortal is dead.
With the fate of everyone she loves resting on her shoulders, Kate must do the impossible: find a way to defeat the most powerful being in existence, even if it costs her everything.
Even if it costs her eternity.

First Sentence: Throughout his eternal life, Walter had witnessed countless summers, but never one as endless as this.

My main complaint about The Goddess Inheritance is that the book is so anti-climatic. Nothing in the book left me on the edge of my seat like I expected; nothing kept me wide awake, worrying for the characters. Nothing kept me invested in the characters, hoping they would survive. They could all die for all I care.

“There comes a point in your life where you have to make a choice,” I said. “You can keep going down the easy path no matter where it takes you, everyone else be damned, or you can fight for what you believe in.” (195)

The battle scenes was also poorly done. Everything was resolved in a few pages and it was lacking the action and the charisma that makes me cheer for a certain character or team. All I was thinking while I was reading the fighting scenes was someone win already and get this all over with! After that, everything was simply too easy.

I think I’m the only one who’ve read The Goddess Inheritance that didn’t find Kate annoying because my anger was focused on another character right from the start: Ava. I couldn’t stand her after realizing what she did. I don’t get it when Kate talked about forgiveness. Sure everything wasn’t entirely Ava’s fault, but she chose to do what she did anyway.

“Then don’t,” I said. “If you’re really sorry, then do something to prove it. I don’t care what. But stop acting like a helpless victim and stand up for what you believe in before you have nothing left at all.” (143)

I am also not satisfied with the ending. Aimee Carter managed to avoid answering the one question I wanted answered ever since I reached the middle of the book. I can’t say what my question is because it’ll be a huge spoiler, but all I can say is that I’m sad Aimee Carter took the easy way out with this.

Overall, The Goddess Inheritance is such a disappointing ending to a series I enjoyed reading. After reading Goddess Interrupted with that epic cliffhanger, I was expecting so much more, but didn’t get it. I won’t say that my expectations ruined The Goddess Inheritance since I didn’t know what to expect, but I definitely expected to get something a lot better than what I actually got.

And from here on out, no matter what the future had in store for us, we would face it together. Always. (283)

As for whether or not I’ll check out Aimee Carter’s future series, I’m not sure yet, but so far, the answer as of now is a resounding no. The excerpt of her new series wasn’t that good and didn’t pull me in. I also don’t want any more disappointments, if you know what I mean.

« Let’s Speculate: Judging A Signed Book By Its Signature
Stacking the Shelves [26] »