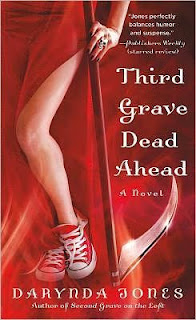 Paranormal private eye. Grim reaper extraordinaire. Whatever.
Charley Davidson is back! And she’s drinking copious amounts of caffeine to stay awake because every time she closes her eyes she sees him: Reyes Farrow, the part-human, part-supermodel son of Satan. Yes, she did imprison him for all eternity, but come on. How is she supposed to solve a missing-persons case, deal with an ego-driven doctor, calm her curmudgeonly dad, and take on a motorcycle gang hell-bent on murder when the devil’s son just won’t give up his plan of seduction…and revenge?

First Sentence: There was a dead clown sitting in my living room.

As I’ve mentioned before in my reviews of First Grave on the Right and Second Grave on the Left, I love Charley Davidson. Seriously, I need a friend like her in real life who can make me crack up in the most serious situations. Every time I pick up one of the books in the Charley Davidson series, I know it’ll guarantee me a great read and laugh.

I was a bit surprised to find out that this time, Darynda Jones strongly tries to remind us readers what had happened in the previous two books in the Charley Davidson series when I first started reading Third Grave Dead Ahead. Darynda Jones didn’t do that in the last book, so it was kind of a surprise that she would do it in Third Grave Dead Ahead. It wasn’t info-dumped or anything, but it was so obvious to me what she was trying to do that it was like the book was flashing a huge REMEMBER THIS? sign at my face.

As expected, Reyes Farrow shows up in Third Grave Dead Ahead, but this time, I don’t like him as much. Or maybe at all. In the first book, First Grave on the Right, I was iffy about Reyes. Yeah, he was technically the love of Charley’s life, but the way he treated her when they first met was just…wrong. Then in the second book, Second Grave on the Left, I sort-of understood Reyes and liked him more. Now, in Third Grave Dead Ahead, I’m back to not really liking him…and okay, feeling a little sorry for him. (Seriously boys, if you want to win over the one you love, you never threaten to kill their parents. It’s like, the number negative one rule to winning a girl’s heart.)

After reading three books in the Charley Davidson series, I’m wishing that Darynda Jones would, to put it simply, tell us what the hell is going on with heaven, hell, and the inbetween. She constantly hints that something is going on in First Grave on the Right, gives us a little information, then does the same in Second Grave on the Left and Third Grave Dead Ahead, constantly leaving us readers begging for more answers. It’s like, every time I finish another Darynda Jones books, I’ll be like ohhh, I get it…but that doesn’t answer any of my questions.

And the ending. I felt so many emotions – anger, then sadness, then bitterness, then finally, happiness even though everything wasn’t truly solved. Thank goodness I have Fourth Grave Beneath My Feet lying right next to me so I can see what happens next asap.

And if you still haven’t read the Charley Davidson series, then what are you waiting for? Charley Davidson would definitely crack you up, make you smile, and make your day a whole lot brighter.